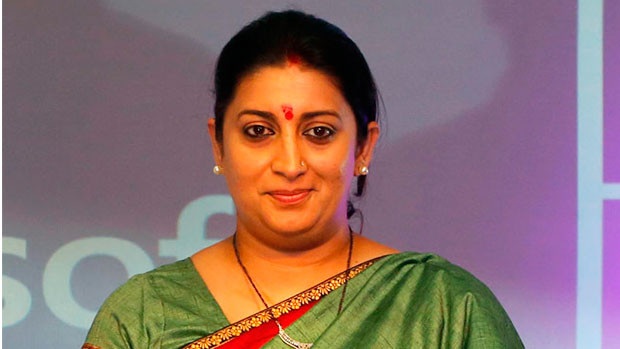 Union Minister Smriti Irani has been removed from the Information and Broadcasting ministry and left with just the Textile Ministry portfolio in a surprise cabinet reshuffle on Monday. The portfolio will now be fully handled by Rajyavardhan Singh Rathore as Minister of State (Independent charge), who was the junior minister in the department.

Irani was given the vital Information and Broadcasting portfolio as an additional charge last July when Venkaiah Naidu resigned after emerging as NDA's pick for the post of the Vice-President.

Irani was first assigned the portfolio of the coveted Ministry of Human Resources Development after the 2014 general elections. However, after controversies, the HRD Ministry was taken away from her in 2016, and she was moved to the Textile Ministry.

In 2017, Irani was again awarded the high-profile I&B Ministry. Her appointment as the I&B Minister was the fourth such portfolio offered to her in the then three-year-old Modi government.

The most recent controversy that brought Irani under the spotlight was the change in the traditional of giving away the National Film Awards. Irani presented a number of the awards, along with now I&B Minister Rajyavardhan Rathore, instead of the President handing over all the awards to the respective winners.

Following the announcement of departure from tradition a day ahead of the ceremony, over 70 recipients conveyed their intention not to attend the event.

Rashtrapati Bhavan had meanwhile expressed 'surprise' over the row, stating that the I&B Ministry was aware of the development for several weeks, and had known it all along.

Earlier in April, the Irani-led I&B Ministry issued a 'fake news directive' that drew the ire of the journalism community. The circular said that the government has “amended” the Guidelines for Accreditation of Journalists. On receiving a complaint, the Press Council of India and the News Broadcasters Association were mandated to determine if the news was fake in 15 days, the circular read.

Barely out of the 'fake news' row, Irani walked into yet another fresh controversy when her Ministry issued a circular announcing the formation of a committee that will frame regulations for online media news portals, and online content. This committee comprised officials and bureaucrats from the I&B Ministry, National Broadcasting Association, the Press Council of India, and the Indian Broadcasters Federation, among others.

The circular came under fire from various sections of the media, with over 100 online journalists penning a letter to the Irani, expressing their concern over the ministry’s proposal to extend traditional broadcasting rules and restrictions to the internet.

In March, it was revealed that Prasar Bharati had been paying the salaries of the employees of AIR and DD from its contingency reserves, as the Ministry had not released the funds for January and February.

The perceived strain was due to an alleged stand-off between Irani and Prasar Bharati over the payment of Rs 2.92 crore as fees to a private firm for the live coverage of the 2017 International Film Festival (IFFI).

However, days later, Irani clarified, asserting that the salary funds were not withheld "as a retaliation to Prasar Bharati not obeying certain dictates of the ministry" but because the autonomous body did not sign an MoU with the ministry.

Besides, Irani was also on the radar for the delay in renewal of licences of Free to Air channels on DD Freedish.