This year, the awards will take a tour across the country with 13 live gigs in 10 languages across eight cities. The awards started with the first gig in Chennai on February 8 with performances by ‘Oorka’ and ‘Live Banned’. The grand finale is scheduled in Mumbai in March 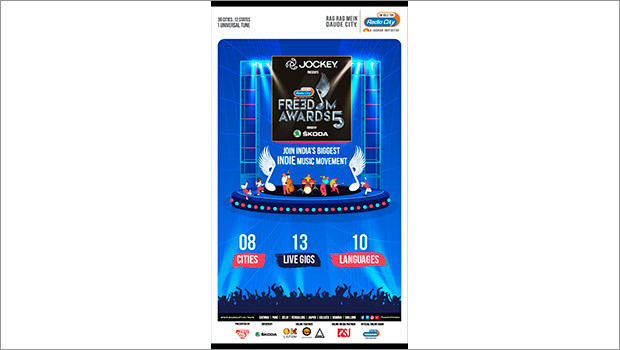 Radio City has geared up to entertain music enthusiasts with the launch of the fifth edition of its definitive independent music awards –Jockey presents Radio City Freedom Awards 5.0 (RCFA) driven by Skoda.

Successfully into its fifth edition, RCFA strives to search and reward India’s independent bands across various genres and languages. The awards this year is all set to take a tour across the country with 13 live gigs in 10 languages across eight cities.

The awards started with the first gig in Chennai on February 8 with performances by ‘Oorka’ and ‘Live Banned’ at the Bay 146. The live show witnessed phenomenal participation from music enthusiasts in Chennai, especially from the independent music community. This gig will be followed by scintillating performances by renowned Indie bands in eight cities. The grand finale and gala award night is scheduled to be held in Mumbai in March at Glocal Junction.

RCFA in its fifth edition has evolved to become a countrywide movement that promotes new sounds of the new generation with a perfect amalgamation of modern music with a traditional touch through their songs with the theme of ‘Sounds of the Soil’.

Musicians and bands ranging across genres such as hip-hop, folk fusion, pop, rock, metal and electronica and winner from every category will be crowned as the country’s top independent artist. RCFA 5.0’s jury includes Luke Kenny, Ritnika Nayan, Vehrnon Ibrahim, Atul Churamani and Yotam Agam among others.

Abraham Thomas, CEO, Radio City, said, “After successful four editions of Radio City Freedom Awards, this year the property has grown multiple-fold to 13 gigs across eight cities and has clearly become the most credible and definitive recognition in the indie space. We have witnessed immense success in the past four editions and are confident that RCFA 5.0 will, once again, establish music as the universal language”

Rachna Kanwar, COO, Digital Media, Jagran, said, “Radio City Freedom Awards has grown by leaps and bounds over the last five years. Today, RCFA has become the annual celebration of the connect between our online indie music stations and the tremendous variety of original music being created in every part of the country. This year we are happy to welcome some new members in our jury and thankful to the ones who have been there with us for the last five years. The buzz getting generated around the nominations is heartening and we are hopeful of a fabulous response.”

MC Cariappa, President, Sales and Marketing, Jockey, said, “We at Jockey are extremely excited to associate with Radio City Freedom Awards 5.0, which recognises and provides a phenomenal pedestal for independent artists. We look forward to this exciting journey along with Radio City in unearthing fabulous talent across the country.”

“Popular Musician, actor, director and a member of this year’s jury, Luke Kenny, said, “The beauty of indie music is often overlooked with all the hype around the mainstream artists. Radio City Freedom Awards is a great initiative to recognise the vast pool of creative talent of this country. It is an honour and a privilege to be a part of this unique platform that gives a voice to artistes who dare to go off the beaten track. I look forward to a great season full of exciting and entertaining performances from the passionate musicians of this gifted country.”

If you are an aspiring musician, you can submit your nominations by logging on to http://www.radiocity.in/rcfa/ till February 28.