The show, powered by Renault Captur, attempts to showcase talent and break all the stereotypes. It began on February 4 at 8 pm 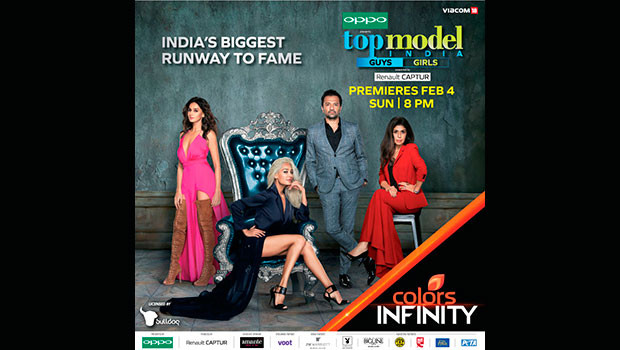 Colors Infinity has signed Oppo as the presenting sponsor for its upcoming reality show Top Model India. Powered by Renault Captur, the show attempts to showcase talent and break all the stereotypes. The show started on February 4 at 8 pm. The show is poised to be a unique platform that will take viewers through the transformation of 12 aspiring models into supermodels under the expert guidance of judges Lisa Haydon, Atul Kasbekar, Anaita Shroff Adajania and mentor Shibani Dandekar.

While supermodel Haydon will shed light on modelling techniques and walking the thin line between art and fashion, photographer Kasbekar will explain the nuances required to grace the cover of a fashion magazine. Shroff Adajania will helm the show with her fashion counsel. Dandekar will tie it all in, as she mentors the contestants on their emotionally charged journey down the most difficult runway. The crème de la crème of the fashion industry such as Mickey Boardman, Manish Malhotra and Kunal Rawal will be a part of the show.

The show will witness male and female contestants battling it out among each other to grab the most coveted title, as the ultimate winner prepares to take over the world’s fashion runway. The winner will win a contract with the prestigious Bling! Entertainment Solutions. In addition to launching their career, the contestants will also have a chance to shoot with the fashion photographer Kasbekar.

Ferzad Palia, Head, Youth, Music and English Entertainment, Viacom18, said, “Colors Infinity has always been the thought-leader in creating content that viewers would enjoy, ranging from original productions to international programming. This platform will not only showcase the latest international fashion trends but also recognise Indian talent. Gauging the warm response from our sponsors and the wider fraternity, we are confident that Top Model India will be well received by our viewers too.”

“We are proud to be presenting sponsors for Top Model India. As a brand, Oppo has always been focusing on the youth, offering them unique experiences and being a part of their lives. Thus, Top Model India is the perfect platform for Oppo to connect with the youth, take them closer to their dreams and help them create memories via technologically advanced and innovative camera phones,” said Will Yang, Brand Director, Oppo India.

Virat Khullar, Head Marketing, Renault India, added, “We are extremely glad to associate with Colors Infinity for the premiere season of Top Model India. Renault Captur and Top Model India’s synergies match perfectly as they are both focused on encouraging incredible style and great capability. Renault Captur is a new age SUV with global success. This collaboration has been an enriching experience and we look forward for an exuberant response from the audience.”

CBS Studios International has licensed the India format rights for the reality competition series America’s Next Top Model to Mumbai-based Bulldog Media and Entertainment. The English language version of the franchise promises the same excitement and anticipation as the international format that continues to be a worldwide success.

“America’s Next Top Model” has taken the world by storm, with the original show now in its 24th season and under licence in over 100 markets and 20 international versions in production.

Akash Sharma, Co-Founder and Executive Producer, Bulldog Media and Entertainment, said, “I’m moved and inspired by the intensity of the ‘INTM’ fan base whose passion for the show triggered the launch of Top Model India for an international audience. The ‘America's Next Top Model’ format continues to entertain audiences all around the world and we are excited to have the opportunity to see the English language version make its debut in India. It is a show that is all about transformation and competition with the customary ‘top model’ style, glamour, and entertainment for viewers to enjoy."

To amplify the debut of this one-of-its-kind platform, Colors Infinity has mounted a multi-pronged pan-India campaign. Besides high-decibel traditional and digital media, the campaign boasts of disruptive partnerships with pioneering brands and fashion authorities. The channel has partnered with JW Marriott Sahar as the venue partner and PETA to support their effort in preventing cruelty against animals in fashion.