Nokia is back with a bang but can it recreate its old magic?

In about a year of its re-launch, in the smartphone category, Nokia ranks fourth in the feature phone market and eighth in the smartphone segment. But can the Finnish giant that once ruled India beat the likes of Samsung and Xiaomi? BestMediaInfo finds out

Nokia, the Finnish brand once synonymous with mobile phones in India, is gradually charting a comeback in India and is hoping to reclaim its old glory soon.

According to Counterpoint Research, Nokia acquired 3% of the smartphone market and 7.3% of the feature phone segment in the first quarter of 2018. The company has already turned profitable in the Indian market.

Last year, Nokia re-entered the Indian smartphone market with another Finnish company HMD Global as the manufacturer. At the time of re-entering theĀ smartphone category, Pekka Rantala, Global CMO, HMD, had said that the company was entering India with the mindset of a start-up and during the last one year, the brand has stood by that thought. Whatās helping it in India is the near 100% brand recall value.

Jyotsna Makkar, Marketing Head, Indian Region, HMD Global, said, āNokia has near 100% awareness in this country. There is scarcely a person who is not aware of Nokia. In a short span of time, we have moved very aggressively. We have launched nine smartphones and eight feature phones, and our android phones are very different that deliver good quality and craftsmanship to our consumers. For a start-up that began the journey just last year, we have already created a very extensive network in India. As we closed our account last year, we were not only a brand with high awareness, but we also witnessed a significant increase in the number of people who were considering us for purchase. So slowly, our franchise has grown.ā

Nokia recently launched a campaign highlighting its #Bothie feature. While the same feature was seen in last yearās TVC during Diwali, Makkar believes thereās always a need to reinforce the new innovation in this segment. Nokia has acquired the old loyalists back and with its new campaign, it is targeting a newer segmentāmillennials.

āWe were scripting a new chapter for our brand last year, and our stand was that we have to attract a new generation of fans into Nokia franchise. Our focus was a lot on increasing the consideration and presence for our portfolio of smartphones. Two-thirds of our consumers are below the age of 35, so we have been able to attract a new set of consumers, including some old loyalists, and more consumers are choosing our devices. We just shipped 70 million phones globally in the last year alone. Itās not just the old loyalists who have come back to Nokia, thereās a whole range of first-time Nokia buyers who have come into this fold,ā said Makkar.

Since the old feature phone days, Nokiaās aim has been to be a different player in the market. After switching from Windows to Android, the brand still chooses to highlight innovative and different features in its campaign to break the clutter. This time, to cater to its TG, the brand has come back stronger with its new feature and is intending to change the selfie-obsessed generation.

āOur aim at HMD Global has been to not just launch another Android phone, but a portfolio that embodies the qualities consumers all over associate with Nokia. Everybody began their phone journey with a Nokia phone and we are very conscious about the fact that innovation is a part of what we need to bring to our consumer. The #Bothie feature, in a very delightful way, captures the āusā in a moment rather than just an individual person. This category is a lot about individualism and about taking selfies that puts across only one personās view while #Bothie captures both sides of the story; thatās the fundamental insight behind the product feature itself.ā

āThe feature phone market is rock-solid and moving well and the reports show how the progress has doubled. There will always be a base of consumers who are feature phone loyalists. So, thereās a need to meet in both segments. Feature phone users are looking at ease of use, durability, battery proposition, and thatās an area where Nokia excels in so, we will continue to participate in the feature phone segment very extensively, and this segment in itself is growing. Smartphone is where we are continuing to build with our differentiated approach towards delivering a great android experience. In this space, we have a brand that is trusted so much and we have a powerful consumer proposition there and thatās the reason what gives us the ability to move forward strongly in the smartphone segment.ā

India is among the top three most important markets for HMD Global and it aims to launch more products and be a blanket brand that appeals to a very wide segment of consumers in the next few years. 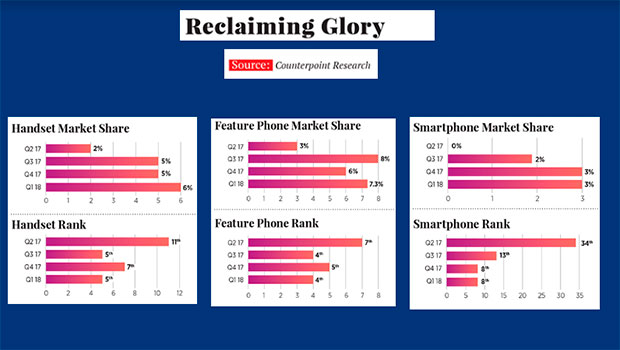 Tags: Nokia Nokia is back
Advertisment
More from this section