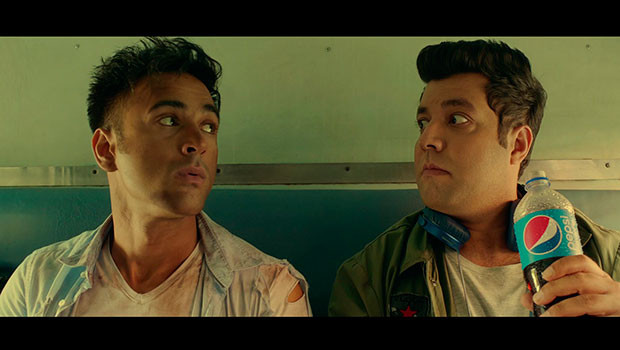 Pepsi reinstates this position in the hearts of consumers through the idea of ‘Kyun Sookhe Sookhe Hi?’ The campaign celebrates the three musketeers – friendship, food and Pepsi – in a never-seen-before way. The unique proposition of the brand spans all consumer touch points, including its packaging. College campuses, retail stores, social media, wherever today’s consumers get together to chill this summer, they will be compelled to answer the question ‘Kyun Sookhe Sookhe Hi’.

The 360-degree campaign kicks off with a TVC featuring Pulkit Samrat, Varun Sharma and Manjot Singh of the popular Fukrey movie fame. The fun film brings alive Pepsi’s cool quotient and its inherent association with food. It shows Pulkit and Manjot, aka Hunny and Lali bidding farewell to Varun, or Choocha as he’s better known, at a crowded railway station. The fond goodbye is interrupted by a wish to indulge in samosas, which results in a high adrenaline chase sequence. Pulkit dodges myriad obstacles before he successfully boards the train to ensure his best friend enjoys the samosas with a chilled Pepsi.

The campaign also celebrates Pepsi’s strongest asset, its packaging. The new Pepsi Foodicon bottles will feature different interpretations of age-old street food favourites and will stand out on the retail shelves. These Foodicons will take over retail shelves and show consumers different interpretations of age-old street food favourites. The distinct visuals on each were interpreted in origami and crafted by Spain’s Raya Sader Bujana as well as celebrated design firm Cocktail Art. They created origami versions of foods such as Bombay’s preferred vada pavs, Delhi’s beloved samosas and Chennai’s favoured dosas.

Raj Rishi Singh, Director Marketing, Pepsi, PepsiCo India, said, “Pepsi has always communicated with consumers in contextually relevant ways. We believe that with the ‘Kyun Sookhe Sookhe Hi?’ campaign we will be able to bring Pepsi to the forefront of all fun consumption occasions. The campaign celebrates friends, food and Pepsi in a unique way, by elevating the fun and food occasions. We are confident that our consumers will love the campaign.”

Senthil Kumar, Chief Creative Officer, J Walter Thompson India, said, "Brand Pepsi has always created popular culture and echoed the current youth trends and aims to connect with BFFs everywhere. This summer Pepsi takes a friendly dig at friendship. You can ask your friends for anything and they will go to unreasonable lengths to get it for you. Don’t you feel grateful? Of course not. This is what happens when Hunny goes to hell and back to get Choocha the samosa he asked for. Choocha makes another demand, to get him a Pepsi with it. And rightly so. How could anyone have their favourite food without a swig of their favourite Pepsi cola, right? The real, raw friendship of the Fukrey gang gave us an amazing casting opportunity. The chemistry between these bright, young, goofy characters fit the script like it was written for them.”

The director of the film, Prasoon Pandey, said, “I found it to be a really charming script about great friendships. That inexplicable bond includes a myriad of shades all at the same time – like an emotional family member, friends go to receive and see off each other, like true competitors they do not let go of any chance to pull each other’s leg, almost like spouses they begin to expect the earth from each other and like only a true friend would, they are also happily willing to move the earth for each other like it is no big deal.”

The 360-degree campaign will also be supported by massive outdoor and digital surround. There will also be exclusive promotions with partners like KFC, Pizza Hut and Subway. The new PET bottles featuring the different food inspired visuals will be available to consumers across all modern and traditional outlets across the country.