Dasgupta showed numbers and research to crease out misconceptions, if any, about the growth of TV in India. He also laid down a few strikingly new facts and observations about television

A panel of industry experts sat down to discuss the ŌĆśFuture of TVŌĆÖ on day two of Ficci Frames 2018. As a precursor to this discussion, Partho Dasgupta, CEO, BARC India laid down numbers and research output to crease out the misconceptions, if any, about the growth of TV in India. While a lot has been said about the growth of TV, the chief of the TV measurement agency in the country laid down a few strikingly new facts and observations.

One of the most interesting aspects he touched upon was how well ŌĆśdramaŌĆÖ sells on TV, across genres. While it is a known fact that Hindi GEC is the biggest genre and is still growing, what urban India watches is very different from what rural views. Rural watches more drama and soaps while urban prefers more of talent hunt, reality and other non-fiction content. Similarly, comedy and wrestling does very well in rural.

Dasgupta said, ŌĆ£Drama works across genres. Any marriage track (in serials) will boost the viewership by 13%. Jail tracks too work well, with a boost of 15% over previous weeks. ThatŌĆÖs one reason why almost all the shows have these tracks too often in their storylines. Mahasangama, where two showsŌĆÖ storylines merge, and the combined cast appears too works very well, witnessing a 20% jump in viewership. These are tools that are often used.ŌĆØ 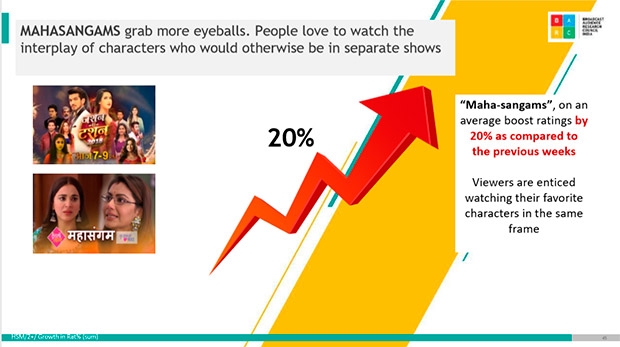 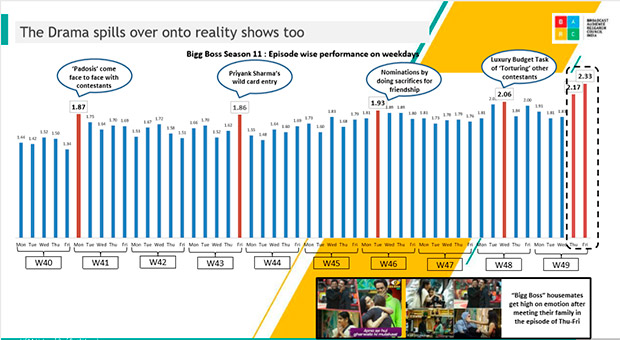 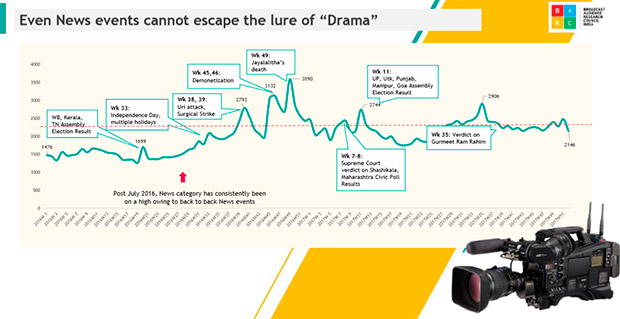 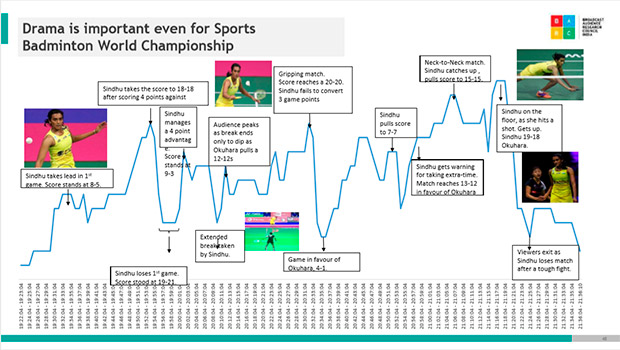 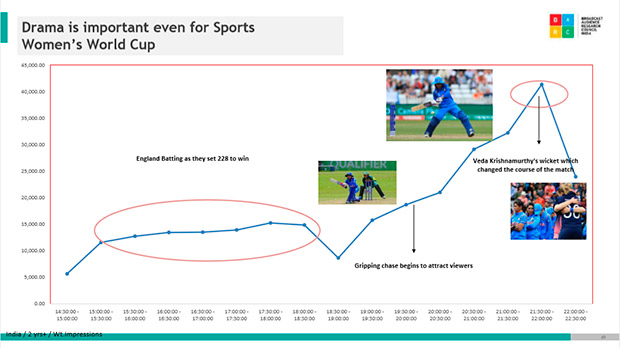 Stretching his observation to other genres of programming and TV channels, Dasgupta said, ŌĆ£Drama on reality shows also works well. Bigg Boss is the best example and all the drama tracks introduced show a peak in the viewership numbers. News too is full of drama and we all know that. Starting from Uri attack, demonetisation, India has got a huge number of news topics in the last 18 months. Any big event shows an immediate hike in viewership. Even in a sport like badminton, as the game progresses and the scores pan out, the viewership increases. In the WomenŌĆÖs Cricket match, nobody was watching when England was batting. When India started to bat, viewership peaked.ŌĆØ

In his presentation on drama, he referred to a senior journalistŌĆÖs poll on Twitter, owing to the last one weekŌĆÖs turn of events. The tweet said ŌĆśWho is responsible for the low depths that news has gone to in India?ŌĆÖ Journalists 25%, business owners 33% and viewers got 42% votes.

Dasgupta, then noted, ŌĆ£BARC and measurement system is a messenger from the viewers, so, take it to your ears and we are here to tell you what they want. One can go on about how the measurement system works, but that is no way of constructively running the future of TV news.ŌĆØ

A few other pointers in the keynote were:

Also, 97% of India is still a single TV market. The startling fact is that even the very affluent audience (NCCS A) and large joint families have 77% single TV households.

566 million people tune in to television every day, of which 191 million are from South, while 375 million are from HSM. People watch 3.42 hours of television daily, on an average. Some places in South watch more, while some other places watch less.

ŌĆ£If you look at it more closely, the PHCHP cluster and J&K, or Tamil Nadu and Pondicherry, have similar time spent per viewer as Portugal. We have a lot of headroom for growth. Similarly, for a Greece, we have MP/ Chhattisgarh and West Bengal. There are pockets in the country that can grow,ŌĆØ he said. 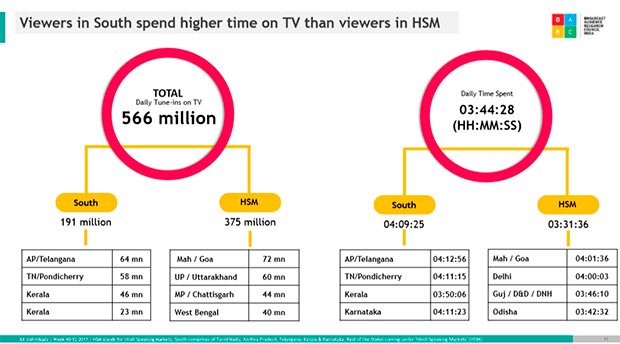 Migration, demographics, digitisation, power, launch of FTAs and so many other things affect the TV watching habits. ŌĆ£We all know that people do migrate around the country and that too impacts television viewership. I have two examples, itŌĆÖs very normal for a Gujarati channel to do tremendously well in Gujarat, and thatŌĆÖs how only 6.5% viewership comes from outside Gujarat. But in case of Bhojpuri, 41% of viewership comes from outside UP and Bihar. This just shows that so many people have migrated from that region to different parts of the country,ŌĆØ said Dasgupta. 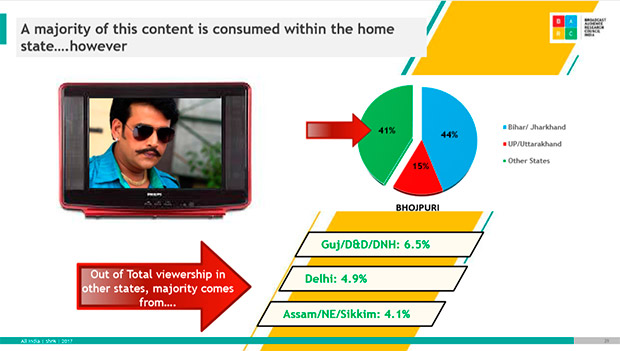 Similarly, 16% of television viewing in Bangalore happens in Tamil. Literacy is another aspect that affects TV viewership. In Kerala and Karnataka, the time spent on TV is high, possibly connected to the high literacy rate in the states.