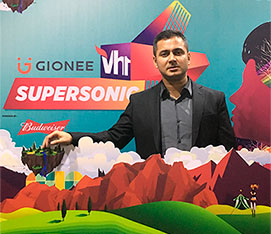 Music festival Vh1 Supersonic is all set to get bigger and better with its fourth edition to be held from February 10-12 at Laxmi Lawns in Pune. In its fourth edition, it aims to become a multi-genre international music destination, featuring over 50 artists across three days. Having partnered with brands like Gionee, Budweiser, Fastrack, Ajio.com, Dot Shot, Bisleri, Reliance Digital, Spraymint, Mexitos, Cleartrip, BookMyShow, Uber and many more, the fourth season is set to give enthusiasts an immersive experience.

Owning to its success in its previous years, the festival has doubled its sponsorship value this year by partnering with brands from diverse sectors and offering a transformed genre line-up. This year, the festival bets big with its branded content offering.

Vh1 Supersonic is in the process of creating customised branded content for its sponsors such as after-movies for Gionee and Budweiser, webcasts as well as web-series that would be aired across all channels of Viacom18 as well as Viacom18’s over-the-top (OTT) platform, Voot, reaching out to 90 million consumers.

Speaking about the branded content the festival will be producing, Saugato Bhowmik, Business Head, Integrated Network Solution and Consumer Products, said, “For the three-day festival, Gionee is set to conduct #GioneeVJHunt. The brand has already started engaging with millenials on social media. The handset brand will also do a six-episode webcast as part of marketing for the festival.”

Bhowmik said that apart from Gionee, Budweiser too is set to engage fans with a ‘beer garden’ at the venue. Fastrack intends to co-partner with ‘Supercrew’ – a concept in which college students help volunteer during the event. Uber too has a booth inside the venue to help fans get rides. Other brands too will produce relevant branded content for the event. Augmented reality (AR) and virtual reality (VR) games will also be a part of this festival as it intends to give an immersive experience to fans. A lot of AR and VR content is already being produced.

When queried about the changes in this edition, Bhowmik said, “In the last four years, we realised that our young audience was inclined towards wanting newer experiences and diverse musical genres. Hence, we took a conscious decision to transform this edition into a multi-genre international music festival. This transformation, supported by the success of our previous editions, has led us to a near doubling of our sponsorship value this year.”

On the marketing front, the channel will use print, over 100 sites for out-of-home and Viacom18’s television network to promote the event. Its partners too will help in promotion on their respective social media pages.

Giving us a sense of the ticketing prices and how the event makes its revenues, Bhowmik said that they are dependent on their sponsors as audiences are not ready to pay higher prices for tickets. Internationally about 50-60 per cent of the revenues come from ticketing, while in India less than 20 per cent of the revenues are from ticketing. He said, “Vh1 Supersonic ticketing revenues are less than one-fourth than in international markets. Fans internationally pay huge amounts to attend such concerts, hence reducing the number of sponsors on board.”

This is the first time that the festival is adding an international hip-hop line up to its festival. The line-up for the festival consists of over 50 artists with three headlining acts. Eric Prydz, Macklemore and Zedd will be the headlining artists.

Fans are in for a never before on ground experience in Pune. The audience can enjoy a gamut of experiential activities beyond the mammoth artist line-up across the three days of Vh1 Supersonic. They can lose themselves in numerous hangout zones, filled with fun and adventurous activities, enjoy in a curated beer garden, weave through engaging art installations, shop till they drop at flea markets and a lot more.

Apart from Supersonic, Live Viacom18 has other properties like MTV VMAI, Nickelodeon KCA, Emerge, MTV Xtreme, and Comedy Central Chuckle Festival among others.