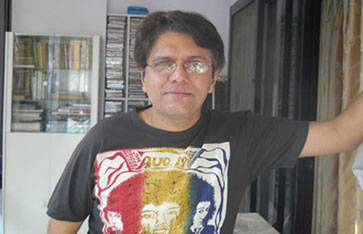 If Jhaveri wouldn’t have met Kunal Vijaykar in 1994, then the creative director at Dacunha Communications, he wouldn’t have become the writer of the iconic Amul brand hoardings. He used to stay at Breach Candy (a posh location in Mumbai), from where he could see Amul hoardings and thoroughly followed them. To try his luck in advertising, he barged into the agency once and inquired if he could write for Amul. At that time, they refused him as Jhaveri recalled, “They (Dacunha Communications) said they have got a team and they are very happy with the kind of work they do. It’s not that anyone can come and start working. Later I also forgot about that.”

After finishing school, Jhaveri completed an architecture course and joined Inter Publicity and did exhibition designing, that’s how he entered the world of advertising. Two years into advertising, he once bumped into Vijaykar and asked if he could work for Amul. Vijaykar agreed and there he got the first taste of the brand.

At the beginning of his career, Jhaveri was a fulltime employee at Dacunha. After finishing two years, he became a copy consultant and he still writes copies for Amul hoardings. Jhaveri said, “Three to four years down the line, I told Rahul (Owner of Dacunha Communications) that though I am working for Dacunha, I would also be working for other places and he didn’t have any problem with that and asked me to only work on Amul hoardings going forward.”

Before Jhaveri joined Dacunha, Vijaykar and Dacunha did copywriting for the hoardings together. Jhaveri is the man behind all the witty Amul hoardings since 1994. In fact, even when he is travelling, he sends the lines from wherever he is. Jhaveri said, “Last time when I was in Barcelona, I sent five lines from there as we had internet access everywhere. So you could be sightseeing, going to the museum or can be at a nice little restaurant, also working on Amul hoardings side by side.”

Jhaveri remembers his first ad for Amul when Mike Tyson had been jailed for rape and was released after serving his jail term in 1994. Jhaveri said, “The line was ‘A bout time Mike’, which means it's time to fight again.”

Dacunha now does a minimum of 15-16 hoardings every month. Earlier, they did just one or two hoardings in 15 days’ time. When asked if that involves a lot of hard work from their end on the creatives, Jhaveri replied, “It involves a lot of thinking. For me, I think of a line and give two to three options. Jayant, who does the art, actually has to draw the whole thing. For him, it’s even more hard work and time-consuming.”

Jhaveri has been working on the brand’s copywriting for the hoardings for the past 22 years; when asked if he has ever got bored, Jhaveri said, “I was never bound to go to Dacunha or be physically present at the agency office. In those days we had fax. I started emailing hoardings only in 2000. For first six years, I had a fax machine at home. I used to fax the hoarding and draw a little doodle and show what could be designed for the hoarding. Emails were a huge benefit for us. Now, mobile phones are even better. I am just a call away and since I don’t have to go anywhere, it doesn’t really get boring. The trick is you continue doing whatever you are doing, suddenly an idea comes, I just remember and record it on my phone. Once I stop, I send it to the team.”

He continued further, “At times there is a little bit of pressure due to the delivery time. At times, news comes in the night and we have to prepare something for the next day. Sometimes we decide the media topic beforehand and get a little bit of breathing space. But very often we have limited time. What has happened is that a lot of newspapers have started using very Amul kind of headlines. By the time our line is up on the hoardings, they are already out in the newspaper headlines and say we have copied the line. We are not instantly able to put out our lines. There is a process to it. I need to write the line, the creative has to be drawn.”

Talking about how his copywriting experience has been so far, Jhaveri said, “It comes very natural to me. When I am with friends, puns come very easily to me. That way, it is a perfect kind of work for me. I don’t have to overthink. But you never know when a writer’s block might appear. So far it hasn’t. Sometimes, it happens and you cannot help it.”

It is not an easy task to relate the brand every time with the topic. To come up with a solution, Jhaveri doesn’t necessarily relate the headline to the brand. Headline mostly relates to the topic. What he keeps in mind is to make a definite relationship between the brand and the baseline.

Elaborating on how to connect the topic to the brand, Jhaveri shared one of his best works that he calls as an example. He said, “I consider my Tendulkar hoarding, one of the best of my works. It had ‘Ten du and Ten don’t’ written on it and that doesn’t connect to butter. What we did, below we wrote try some application. Application means hard work and it also means apply the butter. That’s how we connected the topic.”

One of the best hoarding-of Jhaveri for Tendulkar

Jhaveri mentioned that the most difficult part to work on an Amul witty creative is when he has to write about something morbid in nature and then to link it to the brand. Therefore, he always keeps such creatives a little serious and gives an Amul take on it.

Jhaveri and Dacunha have always worked in close coordination on the creatives. Jhaveri says it has been very rare when Dacunha has not agreed with what Jhaveri has written for the Amul hoardings.

Sharing his experience of working on Amul, Jhaveri said, “It’s an experience that gives me joy and I am proud of it. People around me are proud of my work. It is my calling card. Even if I work at other things, I am recognised for my Amul work. It helps me break the ice when I am meeting people. It has never been a task, but joy. To work for a client like Amul, there is never any boredom as we are always thinking of making news the way for people to laugh.”

Sharing an instance where Amul was caught up in a legal issue due to copywriting and how they got out of it, Jhaveri said, “There was this one ad that we have done when Late Jagmohan Dalmiya was in the news for being corrupt and we did this topical of ‘Dalmiya mein kuch Kaala hai?’ And asked is there something corrupt about him and that caused a little bit of storm as he decided to sue Amul.”

He continued, “When the whole issue went to Dr Kurien (The man behind the brand Amul), he assured us that nothing can happen, as if a person wants to sue of a certain amount of money, he has to produce 10 per cent of the money in the court. Let’s see if he has guts to do that.”

Other than working on Amul hoardings, Jhaveri has also worked on Taj by Vivanta and Syska, as he is also a consultant for IBD. He also writes a lot for Javed Jaffrey, the actor. Among his accolades, he also did scripting for IIFA awards and a few other award shows.

Commenting on his long-term relationship with the agency, Jhaveri said, “Dacunha has same core people since a very long time. They are not very aggressive in chasing businesses. For a small place, we have got a fairly large volume of business and we are not too greedy. In that sense, we are well satisfied and that shows the quality of work.”

About the experience of working for the brand Amul, Jhaveri has a lot to say. “It has given me as much happiness as it has given to the readers. As creative people, we hope that others also get that much joy as we have by creating it. When I like a line that I have written, and see people also liked it the way I have, it gives me immense pleasure. It is only through word of mouth, people have come to know that I write the Amul hoardings.”

Jhaveri has a word of advice for young creative buds who are copywriters. He said, “I meet a lot of young writers and I feel that they want to finish the job very quickly. It doesn’t work like that. Before you think the job is over, you need to ask yourself 20 times, what is the best I can do. Deadlines would be there, but don’t think that your first option would be the best option. The second advice that I would give is to face the fear, whatever it may be.”