Slated to air on Saturday and Sunday at 9pm slot from February 4, the show will witness viewers voting in real-time for their favourite singer through mobile app 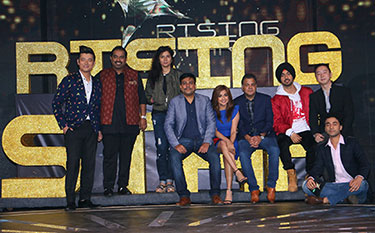 Slated to air on Saturday and Sunday at 9pm slot from February 4, the show will witness viewers voting in real-time for their favourite singer through mobile app

Showing immense confidence in its upcoming reality show Rising Star, Raj Nayak, CEO Colors, said, “Rising Star will definitely have a Season 2. We are sure that the audience will like the season one and we will get the response that we are expecting.”

The jury is still out on whether the country is ready for a digitally driven cashless economy or not, whether the internet penetration is enough or not and if the data prices will drop further but the flagship Hindi GEC from Viacom18, Colors, has already taken a step ahead based on the digitally savvy Indian populace.

Rising Star, the upcoming show on Colors, will be telecast live, enabling Indians to decide the fate of the contestants. The channel has launched a mobile application, ColorsTV, for the voting purpose. Viewers are expected to vote with a ‘yes’ or a ‘no’ for the contestant. The talent hunt show has three experts to guide the contestants in their singing journey. Shankar Mahadevan, Diljit Dosanjh and Monali Thakur will each have seven per cent power in their hands, the rest 79 per cent power rests with viewers.

Produced by Optimystix Entertainment, Rising Star is slated to air on Saturday and Sunday at 9pm from February 4. The slot will be vacated by Bigg Boss Weekend Ka Vaar, which is celebrating its finale on the January 29. The channel has also planned to launch a fiction show on the 10.30 pm weekday slot, which is when Bigg Boss episodes were airing during the week. The channel has planned to end its weekday primetime at 11pm, which till now was ending at 11.30pm.

The live format of the show has its share of excitement and risks both. But Nayak is not perturbed. He said, “There will be occasions when somebody will make a mistake but that’s okay. One should have a share of vulnerability in life and everything is not picture perfect. We are ready to take that risk.”

While there are still discussions about data speed, internet and mobile penetration and other issues, Nayak understands that he is testing the waters for readiness. He explained, “We don’t know if the audiences are ready but we hope that they are ready. And how will one know if we don’t give them a chance. People told me that audiences were not ready when I was launching Naagin and 24. But the audiences lapped up those quite well.”

The show has a moving wall that can move up and down depending on whether the contestant gathers 70 per cent votes or not. The channel says the show is as big as Jhalak Dikhhla Ja but it looks like the production costs will be as much as 30-40 per cent higher than the dance reality show.

When asked why they were sponsoring Rising Star, a novel format in India, Will Yang, India Brand Director, Oppo Mobiles, said, “The earlier associations with Colors really worked well for us. Be it 24 Season 2, Naagin or Bigg Boss, the quality and treatment to the content is very high and hence it suits our brand. Their thrust on digital is ought to create a healthy brand awareness for us.”

For this particular show, Yang said, “This is the first live show on Indian TV. Many habits are common among the Indian and Chinese people. We have a lot of live shows in China. We have confidence in this format.”

The primary TG of the brand is 18 to 35 years. On whether there’s a female skew in the product or the ‘selfie’ feature, Yang denied, saying, “Through our research, we know that men and women like selfies a lot. It is equally shared by the two genders in India and it is not female skewed. Our global strategy is entertainment marketing. Last October onwards we have sponsored a lot of Hindi movies on Set Max.”

Manisha Sharma, Programming Head, Colors, said, “The beauty of the show lies in the wall that hides the talent, putting emphasis on voice and melody. Every talent’s destiny will be dictated by their ability to draw in the viewers with their vocal intonations and emotiveness. The term reality will be redefined through this show. We have conducted auditions across more than 25 towns and cities across the country, and uncovered some hidden jewels whose unique voice quality and endearing personalities will appeal to the viewers’ sensibilities, encouraging them to vote and celebrate outstanding talent.”

On the successful adaptation of the show in India, Gary Pudney, Head of Asia Keshet International, said, “Rising Star is a truly trail-blazing format which has hailed a new frontier in global entertainment. Following several successful seasons of the show around the world, we are absolutely delighted that this pioneering show will be available to Indian viewers and to be working with such a forward-thinking partner as Colors.”

Vipul D Shah, MD, and Co-founder of Optimystix Entertainment India, said, “The technological and logistical requirements ensure a larger-than-life scale which will amplify the opportunities for talent to rise and excel. The entire country has its eye on ‘Rising Star’ and we are pushing the boundaries of entertainment to bring them a show that has created waves internationally and is now set to heighten the viewing experience in India.”

On the marketing front, Colors has devised an extensive marketing campaign designed to bring alive the ‘Rising Star’ experience for the audiences. During the launch phase, a multi-media campaign highlighting the message, ‘Download the Colors TV App, Be the Judge and Be Seen Live on TV’, will be executed across key Hindi speaking markets. The channel has tied up with Radio Mirchi. On-ground, Colors has created special ‘Rising Star experience zones’ in Mumbai, Delhi and Ahmedabad to create awareness about the live voting module of the show. On the digital front, an extensive digital campaign through hashtags #KuchFarakNahiPadega, #Unglikar and #UngliUthana will drive conversations among target audiences. The investments in marketing will be more because the primary goal will be to create awareness.

Other sponsors on the show include Tata Motors Commercial Vehicles on Colors SD feed and Kajaria Tiles and Jaquar bathroom products on Colors HD feed.

On the advertiser response, Nayak said, “This is the first season. There are two kinds of advertisers -- one advertiser is ready to take the gamble with us and the other wants to wait and watch. We have a mix of both.”

By downloading the ColorsTV app, the viewers will be able to vote for their favourite voices tucked behind the ‘Rising Star ki Deewar’ in real-time. And the possibilities are limitless; the gifted talent could be as young as six years old or even beyond 60 years, a band or even a duet. The hosts on the show will be Meiyang Chang and Raghav Juyal.