We are not just sitting and building ivory towers, we are on the roads all the time, says Anita Nayyar of Havas Media Group India

The agency, which has completed 10 years in India, has grown from a Rs 150-crore company to Rs 3,500-crore giant. The CEO of India and South Asia shares the company’s journey so far 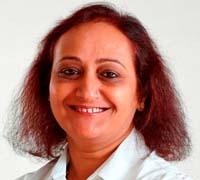 We are not just sitting and building ivory towers, we are on the roads all the time, says Anita Nayyar of Havas Media Group India

The agency, which has completed 10 years in India, has grown from a Rs 150-crore company to Rs 3,500-crore giant. The CEO of India and South Asia shares the company’s journey so far

The agency went through a lot of nomenclature change. It was earlier a part of euro RSCG, which was a full service agency. In 2013, it became the Media Planning Group (MPG). Many clients still call it MPG. Later on it became Havas Media.

The agency works with clients across the sectors and categories. This year marks as a milestone for the agency’s head office in Gurgaon as it takes a big leap to its swanky new location in Cyber Hub, DLF Cyber City Phase 3 from its earlier location at DLF Building No. 9A, Cyber City.

BestMediaInfo met Anita Nayyar, CEO, Havas Media Group, India and South Asia, to know in detail about the agency’s journey and how it has dealt with the challenges over the years. Excerpts:

It has been an interesting and a rollercoaster journey. Everything was not as hunky dory as things should be. We had a tough time and have worked really hard. When we started off, we were very small. The other challenge was that we entered the industry very late, when everyone else has been there for the past 20-25 years. We had to cover up a lot of ground to really try and keep pace with agencies at our level. Given the fact when you start new and are not very big, to get new clients, businesses and to grow the agency also becomes a challenge. I think we have managed pretty well over the years. Media has grown 10 per cent and we have grown 40 per cent. We have taken those leaps to cover 20 years in 10 years and to try and make ourselves noticed in the industry. I think we have got a fair amount of clients and advertisers in the industry.

The name of the agency is quite buzzy. It has a very different connotation in Indian terms. How have the people reacted to the name and has it affected business or brand image anyway?

Havas is a French word and H of Havas is silent in French. The word has a different meaning in Indian terms. But for us, Havas is not about lust, but passion. It’s how you look at it. For us, lust and passion are two different words. We have been a very passionate lot. Lots of businesses that we have won, many clients have said that the passion was missing in the other agencies and have found that passion in us. For us, Havas in any way pronounced works beautifully because it is the passion that we bring to the table.

How has the agency dealt with the challenges through the years?

We were a small agency. We were known as a Reckitt Benckiser agency. We went through a lot of name changes. The challenges were that we were very small and not very well known. We also didn’t have too many big clients. We have worked really hard over the years and have got the right people on board. We have many clients who are with us for more than six to seven years. We are not just sitting and building ivory towers, but are on the road all the time.

Do you have any strategy in place for HMG going forward?

We plan to continue to grow leaps and bounds. The only challenge is that each year your base is increasing. So, when you have to grow four times of what the media industry is growing, it becomes a bigger challenge. We are a challenger brand and used to taking these challenges. We will continue to do that over the next 10 years with the same gusto.

How does the agency differentiate itself and stand out in the Indian market?

We lead from the top. There is a huge amount of senior management involvement at all levels. I and Mohit, our MD, joined almost together and have been here for almost 10 years now and have always been available for clients. We have been attending all the meetings. Right from the pitch stage to attending all the important and crucial meetings, we have been there and everywhere. We are a medium size agency, but fairly agile. We customise our services as per client requirements. Globally, I think we are one of the first agencies to adopt digital to its core and to provide integrated offering to the client. We think very differently. The group has invested a lot behind tools and processes since we are a young agency. Strategically we are known as one of the best agencies globally. RECMA has always given us A+ on this front. We are the only agency in the world today that does ‘The meaningful brand study’. In this, we figure out how meaningful the brand to the consumers is. The first year revealed that 75 per cent of the people don’t care if the brand doesn’t exist tomorrow; unless the brand is very meaningful to that person. You have to be meaningful at the personal level, collective level and at the market place level as well. With this we come back to the clients with strategies for them to be far more meaningful to the consumers.

What is the planning and strategy model for the agency?

We do our planning through a model created in-house: OSEP, which is owned, shared, earned and paid. That’s the way we compartmentalise the media. Owned is all the assets that the client has. For example: website, packaging, product, etc. Shared is what as a client and brand you share with anybody else. Earned is the chatter in the market place. Earn media is what you have earned in the market place and you don’t need to pay for it and then the paid media, which is the regular TV, radio, print media. Paid media is expensive and does not influence the consumer as much. Earned media which you do not pay anything for is of the highest influence.

Media agencies are notorious for their hectic work environment. How will you describe the work culture at HMG?

We are a smart and happy agency. We are known as a very happy agency. There have been instances where people left and went to other places for money and after a couple of years, they came back. We have zero politics in our agency. We do care a lot for our employees.

Big data performance marketing has taken predominance today. Where does HMG find itself standing in such a scenario?

We are one of the first agencies to have embraced to the changing market scenario. We work on social media, mobile and search. We have adapted to everything to get data and content. These are the two buzzwords today – data and content. I think we are pretty much ahead of the curve as far as this is concerned.

How does the agency deals with the remuneration and talent-retaining problem, which is prevalent everywhere in the market?

What will the media planning landscape look like 10 years from now?

I think digital is taking the forefront in any case. In India, television will continue to be important as it is the highest reached and efficient medium. But the way digital is progressing and the speed at which it is growing, I think we will have to succumb to digital pressures. The way we look at television is not television alone. We look at audio-video planning. Any scheme to which the consumer is exposed to comes as AV planning.

What are the important campaigns that have been the stepping stones of success for the agency?

There is not one but many. But the two that made us feel very proud and we thought was very smart is when we did Dettol advertising. This was after the Ministry of Health came up with a campaign to make people aware of swine flu and promoted washing hands before eating. We tapped that and after that, Dettol’s sales went up. The second one was when we launched MTS in the country and The Times of India changed its masthead. The O of The Times of India became the oval shaped logo for MTS. That was the first time Times of India did that. After that a lot of people did that.

How important are awards for Havas?

Awards are important. Perception in the market place makes a lot of difference. If you are winning the awards, people think you are a very happening agency. I am not concerned by the way the judgement in the awards happens and will keep that opinion to myself. But I think awards are important to get noticed.

Do you have any word of advice for the media fraternity from your end?

I have always maintained that there is no shortcut to success. You have to put in efforts and work hard and things will fall in place.