Redtro FM is a clear differentiator; it’s not nostalgic in nature: Nisha Narayanan 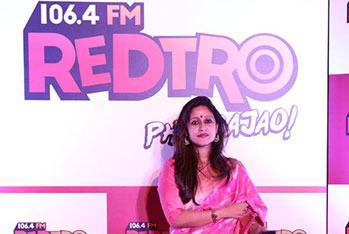 Redtro FM is a clear differentiator; it’s not nostalgic in nature: Nisha Narayanan

A lot has been written about how it is difficult for radio to grow and its various challenges. Nevertheless major radio players are still trying to establish their presence in almost all cities of India.

Establishing a radio station is difficult as it doesn’t have a robust analytics system. That’s where the whole problem lies. The basic premise for a radio broadcaster to function when it is initially launched is ‘perception selling.’ An advertiser will only look at the media (most of the time) as a reminder medium, not considering ratings but perception.

The fact remains that the current diary method is old and most of the players don’t subscribe to it and so the industry needs to come together to put things in place when it comes to ratings.

Perception selling is a long process besides radio audience measurement (RAM). In the middle of all these challenges, Red FM recently launched its second frequency, Redtro FM, in Mumbai.

Catering to the ’90s music, and launched as the first radio station under its newly acquired Phase III licences, the company seems to have launched its own competition in an already over-crowded radio market in Mumbai. BestMediaInfo caught up with Nisha Narayanan, COO, Red FM and Redtro FM, to know about going retro and much more.

Narayanan shared the story of how they went ahead with the station in spite of legal issues, which delayed the launch. But it seemed the delay helped them do more research with proper consumer insight and arrive at the proposition of playing’90s music or ‘aaj ke zamaane ka retro’ (Redtro plays the retro of the new age). Intending to cater to a generation that grew up with music of the ’90s, the brand is a clear differentiator and is not nostalgic in nature.

There will be humour, comedy, city life, sports, Bollywood and all the talk relevant to the consumer of that age group. Narayanan adds, “It’s a myth that people who listen to retro are conventional, and I think we are here to thrash that myth. Whoever listens to retro can still be cool and relevant.”

With its tagline ‘Phir Bajao,’ Redtro aims to bring back the most loved tunes from the era of Govinda’s ‘thumkaas,’ Akshay Kumar’s ‘jhatkaas,’ Shahrukh and Salman’s Ishq ka tadka! All in all, Redtro is a tour back to the ’90s which is sure to touch memories from those days. It might remind you of your first love, your first salary, a year of happiness, a week of tears or that someone special.

Establishing a new brand in existing metros is difficult. Not only that, establishing a second frequency is in itself like creating competition for one. But Redtro is not the first to launch its second frequency. Another launched a ‘retro’ genre station earlier this year.

While Red FM is for the masses, it is not catering to anybody and everybody. It has a distinct format. Any time one tunes in, one can hear a similar flavour. When a product is defined, it will establish itself in the mind of the listener, believes Narayanan. Apart from that, consistency is also important. Narayanan foresees a maximum reach of the brand in Mumbai in the coming months and years to come.

The launch is supported by 360 marketing initiatives, beginning with outdoor and then slowly including all kinds of media.

Asked if the frequency, 106.4, is too far for the user to reach the channel, Narayanan said they didn’t have a choice. She said, “The choices were 91.9 and 106.4. So, we were bidding for both and it was not really in our hands, especially when there is a limitation of frequency. Whoever bids more will get that frequency.”

From a layman’s point of view, Red FM and Redtro FM are competitors. But Narayanan says they are two different products. While one is more for masses, the other one is an adult contemporary station. “It’s a hot AC station. So they are two different brands with two different genres. I don’t really see that as a competition. I think it is about growing the market and revenue and occupying a larger market share in the radio market.”

The industry has been facing a lot of issues for a while now. In all conferences, the need for a ratings system is spoken about. Narayanan thinks it is high time the discussion ends and a body comes in place, something similar to a BARC. “The diary method is something that most of us are not comfortable with. Most of us don’t even subscribe to it. Even now, we are doing perception selling,” she adds.

And when they come together, the industry should not just limit itself to just the top three or four markets but all of them. A lot of smaller markets have four-five radio stations and one cannot have a measurement system in them.

Apart from ratings, another challenge will be talent crunch as the industry moves to phase III. There are other issues like the need for an increase in FDI, relooking at the policy when it comes to base price of certain markets and lot more. Narayanan says if the intent is to have more players, then the government needs to ease the policies a bit.

The response for the month-old station has been good. While the broadcaster is still fine-tuning the product, a lot of clients have already approached for innovations. It will indeed be a strategic call, while keeping other marketing initiatives in place.

On their plans on the digital front, Narayanan said, “I have always said our fight is never between a Mirchi or Fever or any other competitor. Our fight is against technology. We need to constantly create engaging content and also be available on different platforms. So, digital is something that is growing at a large pace and we cannot ignore that. That’s something where we need to be. Redtro is strongly going to focus on its digital platform.”

This is the broadcaster’s second frequency in Mumbai. It otherwise has frequencies in Jodhpur and Srinagar which they should launch in the coming months. For cities like Chandigarh, Patna, Chennai and few more, they are awaiting clearances to launch Red FM.

Narayanan shares her expectations from the station, “We want Redtro to be a formidable brand in the next one year and have a high recall among listeners as well as clients and agencies and be a strong and engaging product.”