Mobility is the future of India, says Facebook’s Umang Bedi

Growth, engagement and partnerships will remain key business focus for the Internet giant in India while it continues to move businesses on its platform. A lot of exciting things are in store for the consumer 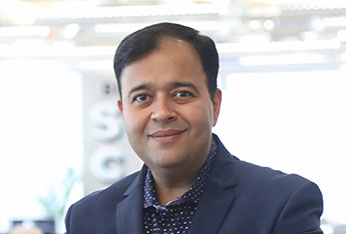 Mobility is the future of India, says Facebook’s Umang Bedi

Growth, engagement and partnerships will remain key business focus for the Internet giant in India while it continues to move businesses on its platform. A lot of exciting things are in store for the consumer

It’s been 100 days since Umang Bedi took charge as Managing Director of Facebook India and he has left no stone unturned in meeting leading brands to discuss their digital way forward. Facebook, which has over 1.8 billion people, is one of the largest platforms to connect with the consumer. Marketers have also seen the reach of Facebook and so the social media platform has become much more than just connecting with friends.

It is estimated that there will be about 730 million Internet users in India by 2020, the digital ad market will grow from 14 per cent to 40 per cent and the world has already gone mobile. It is no longer ‘going’ mobile. There are 7.5 billion mobile connections in the world, which is more than the world’s population and it clearly is the future.

With the penetration of 4G in India, more consumers will use the higher speed and will have smarter phones to engage with brands. Bedi is positive that mobility is the future of India. Mobile will be the first preference of consuming video and all forms of content and with 4G, it will only increase.

It has also been seen that people are increasingly spending time on Facebook for various things. The ‘News Feed’ stands true to its literal sense and Facebook is constantly evolving that. Not to forget other platforms in the communications business.

While all that remains, Bedi’s agenda of addressing the media was to inform about the India business strategy. Bedi touched on three key aspects for the Indian market -- growth, engagement and partnerships being their key business focus. Their business strategy is further divided into verticals, brands and agencies, where they closely work with respective partners and help them understand different Facebook tools, which will eventually help the brand achieve its goals.

Citing an example, Bedi said that an online women’s fashion brand named Limeroad.com has completely built its platform with the help of Facebook. Bedi said they follow a five-step approach to build a business on their platform -- targeted reach, deep engagement, creative, education and measurement and business results.

An important focus has also been on how Facebook has been helping brands grow their businesses. Bedi threw light on how they’ve been a key catalyst in moving businesses for brands. Various brands from Tata Housing to Samsung to Ola and brands like Durex, Adidas, Tanishq, Garnier and many more are already seeing results of using Facebook as an effective platform for digital marketing.

Quoting an example of Durex India, Bedi said the goal of the brand was to use the excitement around Cricket World Cup within its target audience to grow both its brand awareness and market share. Durex used Facebook’s Audience Insights tools and targeted young men who cared about cricket. The campaign gave tremendous results for the brand. Turning insights about its audience from Facebook into relevant creative, and supporting it with strategic media buying, helped Durex achieve a lift in sales during the tournament. From February 15 – May 31, 2016; it achieved: 9 per cent increase in year-on-year sales; 29 per cent increase in sales during the campaign; and it reached 54 million men in India.

Speaking on the metrics front, Bedi mentioned that there had been a controversy about over-rating one of their reports due to some miscalculation. They had also understated the reach in a report because of the error. However, the Internet giant is continuously working with Nielsen, Moat and Kantar for metrics and endeavours to provide accurate metrics to its partners.