MTV’s increasing focus on ‘She’ power

With the launch of Splitsvilla season 9 with the theme ‘Where Women Rule’, the channel is increasingly approaching women-centric themes and programming 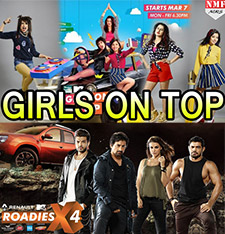 MTV’s increasing focus on ‘She’ power

With the launch of Splitsvilla season 9 with the theme ‘Where Women Rule’, the channel is increasingly approaching women-centric themes and programming

After a special women’s team in MTV Roadies X4 and another fiction show Girls on Top, the youth channel from Viacom 18 continues to pave its way into women-centric themes and programming in their content line-up.

The ninth season of their popular reality show Splitsvilla 9 is based on ‘Where Women Rule’. The upcoming shows, India’s Next Top Model (INTM) and Angels of Rock in July, will also focus on women. INTM is all about fashion, women and finding new talent.

Talking about the focus on content, Ferzad Palia, Head, Youth and English Entertainment, Viacom18 explained: “Largely, there are two parts to it, one is that women are now getting a voice of their own, expressing and talking about themselves (thanks to social media). Second, the respect for women and the acknowledgement of their power and capabilities are increasing by the day, despite all the violent news that we hear around.”

He added, “We are aiming at showing the female protagonists in a progressive sense, not regressive.”

Palia said there is no study to show women (in this age-group) watch more TV than men, rather there is a slight skew to the male audience at 45-55 in the genre and for MTV.

Along with all of this, music remains an important part of the channel’s content line-up. The channel never tried to shed off the music content completely. The channel has a lot of original music shows like Sound Trippin, Coke Studio and Unplugged. There is a total of about seven to eight hours of music every day on the channel, including the pure play slots. “Music is something that will always resonate well with the youth. The fact of the matter is on the non-music side, no one has cracked the audience as well as us,” added Palia.

As for the inclusion of new categories of advertisers, Palia said that it is a cycle. “Every few years,a new category of advertisers pops up and any category that wants to connect to the youth will obviously be working with us. Nescafe is a different kind of brand that has come to us and we created a different kind of product for it called Nescafe Lab. We do customised solutions for advertisers which makes a lot of sense for them. It is much above than the vanilla 30-second slot.”