Kids play: Viacom 18 aims at building Sonic as strong No. 2

After attaining close to 34% topline growth, Viacom 18’s Kids Cluster has now decided to beef up its second channel, Sonic 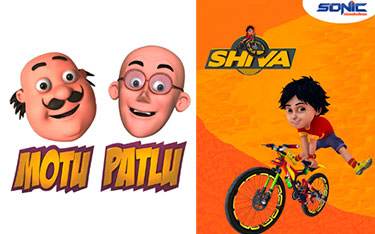 Kids play: Viacom 18 aims at building Sonic as strong No. 2

After attaining close to 34% topline growth, Viacom 18’s Kids Cluster has now decided to beef up its second channel, Sonic

Having increased advertising rates by about 40 per cent in the last one year, the kids cluster of Viacom 18 – comprising Nick and Sonic – has witnessed about 34 per cent topline growth. Along with maintaining its number one spot for 20 months now, Nick has also helped the cluster grow the consumer product revenue by 60 per cent.

Nina Elavia Jaipuria, Viacom 18’s EVP and Business Head - Kids Cluster, attributes this growth to local characters. “It finally feels that all the hard work, innovation and risk that we took a few years back have finally paid off.”

The channel has decided on continuing with the risk taking as it has shifted one of its most popular properties on Nick – ‘Shiva’ – to the second channel of the cluster, Sonic. Shiva is well appreciated by the audience, and has been one of the major drivers of viewership. However, Sonic’s presence is limited to the digital platforms, clearly missing out the C&S homes which account for about 20 per cent of the total TV homes, as per the network’s estimation.

“We will be putting all of our efforts into growing Sonic now. Moving Shiva is a bold step, but for Sonic we aim at getting new shows, right content and strong marketing,” said Jaipuria. The network is quite confident on holding on to the number one position of the genre through Nick on the back of a robust library consisting of Ninja Hattori, Motu Patlu, and Pakdam Pakdai.

“All the efforts and the top viewership of Nick would get wasted if monetisation doesn’t come along. Hence, we increased our ad rates by 40 per cent over the course of time. We have received a very good response from advertisers in content integration – Mother Dairy (Motu Patlu) and Boost (Shiva),” informed Jaipuria.

Content strategy: While the network has consciously decided to focus its efforts on building their own Intellectual Properties(IP), it still continues to acquire content. Animation is an expensive procedure, having a long pipeline. But it has a longer shelf life, and attracts greater affinity and loyalty from kids. The channel has also extended its characters to make 60- and 90-minute long movies. The viewership of the kids genre as a whole stands at six per cent of the total TV viewership in urban and rural markets. However, if one considers only the urban markets, the figure goes up to eight per cent.

“Though the advertising share of the genre is still much lesser than the viewership share, it is following a healthy trajectory. It has grown by close to 35 per cent in the last two years, bringing about three per cent of the total TV advertising monies to the genre. It is close to Rs 425 crore at the moment.”

Marketing push: The network has planned a huge summer campaign for kids, which will be extensively promoted through a 360 degree marketing campaign. On television, it will be a cross network initiative, while activations will play a major role. About 20-25 per cent of the monies will go into activations. Jaipuria describes kids as “the gadget gurus”, pressing on the increasing demand and need of the digital platform. However, the marketing share reserved for digital still remains in single-digit.

As for the increase in non-kid categories of advertisers, the genre has been getting good response, mainly from categories like automobile, insurance and e-commerce, along with the usual FMCD and FMCG. “Children are no more considered passive buyers. They are ‘in-house consultants’ and participate in all in-house decisions, be it the colour of the house, the car to purchase, the restaurant to go to, or the holiday that the family is planning. Pester power is working everywhere. Along with that, the advertisers understand how co-viewing is very much rampant in India because of single TV households,” said Jaipuria.