In the seventh season of the popular reality show, the channel has upped the scale of production and expanded the limits geographically in search of talent. Starting April 30, IGT will take the Saturday and Sunday 9 PM slot 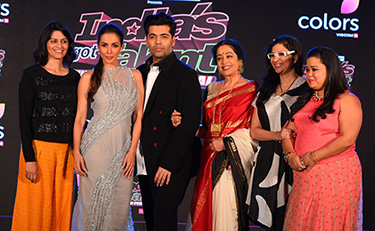 In the seventh season of the popular reality show, the channel has upped the scale of production and expanded the limits geographically in search of talent. Starting April 30, IGT will take the Saturday and Sunday 9 PM slot

India’s Got Talent – in its seventh edition this year – has gone to the interiors of the country in search of talent, getting 8,000 contestants from 22 cities and small towns. The show has the tagline ‘Hunar hi Pehchaan Hai’ (Talent is the only identity).

The show will be replacing ‘Fear Factor Khatron Ke Khiladi’ which ended on April 3, 2016. The channel had been filling its weekend primetime slots with movies and special events since then. Now, starting April 30, IGT will take the Saturday and Sunday 9 PM slot on the channel.

The channel has roped in Maruti Suzuki as the presenting sponsor and L’Oreal Paris as the ‘Powered by Sponsor’, while Nivea, Liberty Shoes and Kent RO Systems are Associate Sponsors especially for its HD feed.

Along with the expanse in terms of the number of cities, the channel has also upped the level of talents, stunts, shooting locales and scale of production this time. The specialities of this season include performances like sand art, beat boxing, mind reading, underwater and water sport acts, aerial yoga, horse acrobatics and ice skating and skydiving acts. Further, special episodes will celebrate rustic and traditional art forms which have lost their individuality over the years.

This year, IGT will also see a lot of celebrities and past winners of the franchisee participating in the search for talent.

Manisha Sharma, Programming Head, Colors, said, “The beauty of India’s Got Talent is that it just lets you be. It doesn’t try to restyle you. Hence the focus is purely on what you bring to table in terms of your talent. It’s the only credible platform that the country has which gives opportunities to the uniqueness in an individual. As we venture into the bylanes of India in search of the best, with a promise of larger than life performances, we promise to create an unparalleled viewing experience for our discerning audience.”

Aradhana Bhola, Content Head, Fremantle India Television Productions, said, “In its seventh season, India’s Got Talent’s search for superlative talent has taken us to the smallest towns and villages including Loharika in Punjab and Nunerbhari in Bengal. We hope that the show’s larger-than-life backdrop and nationwide search for superior talent will enthral viewers and keep them glued to their television sets.”

An extensive marketing campaign has been planned for one of the biggest properties on the channel. On the digital front, the channel has devised various activities including a blogger outreach programme, a glimpse into the lives of talent from previous seasons including last year’s winner Manik Paul, and invite talent-led stories on social media platforms using the hashtags #IFeelTalentedWhenI and #HunarHiPehchaanHai amongst other initiatives.