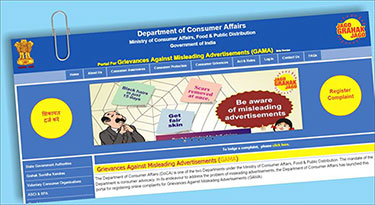 The Grievances Against Misleading Advertisements (Gama) portal, which is just about a year old, has already processed more than a thousand complaints against advertisers. Most of these complaints were from individual consumers, while some were from consumer organizations like the Consumer Education and Research Centre (CERC).

The Department of Consumer Affairs (DoCA) of the Union government had entrusted the task of monitoring the web portal to the Advertising Standards Council of India (ASCI), which is an industry body. The web portal www.gama.gov.in was launched on March 18, 2015 and has received more than 1000 complaints till date.

All Gama complaints have been diligently processed by the ASCI. The portal received complaints against advertisements of products and services from almost all sectors (telecom, banking, consumer durables, etc. and emerging sectors like e-commerce) across a range of advertising media (television, print, web-sites and other digital mediums, etc.).

Some complaints against advertisements of well-known brands, were processed by the ASCI through the Gama portal and the complaints were upheld by the Consumer Complaints Council (CCC). In all such cases the advertisers either withdrew the advertisements or modified them appropriately within the stipulated period and compliance to the CCC decisions was assured.

Commenting on the success of the Gama portal, C. Viswanath, Secretary, Department of Consumer Affairs, said, “The problem of misleading advertisements is extensive and needs immediate attention. Launch of the Gama Portal is helping us to accomplish the vision we have towards protecting consumers’ interest. The need for the Government and a self-regulatory body like ASCI, to work together to provide effective and timely grievance redressal to consumers is key to tackle the issue. This model successfully demonstrates ‘More Governance and less Government’.”

Speaking on behalf of ASCI, Benoy Roychowdhury, ASCI Chairman, added, “ASCI was entrusted with the responsibility of Gama complaints processing. I am very happy that ASCI has been able to speedily address all 1000+ complaints received till date. This co-regulation initiative between Government and ASCI, has further enhanced effectiveness of protecting consumers from advertisements which could be making misleading, false or unsubstantiated claims. We wish Gama, entering its second year, greater success.”

The complaints against misleading advertisements received on the Gama portal, are handled through a three-tier system. The complaints are first processed by the ASCI. If the errant advertisers still do not comply with the directives given to them, the complaints are then directed to a sub-committee, headed by the Joint Secretary in the Department of Company Affairs, under an Inter-Ministerial Monitoring Committee (IMMC). In the case of persistent offenders, the regulator is empowered by law to take action.