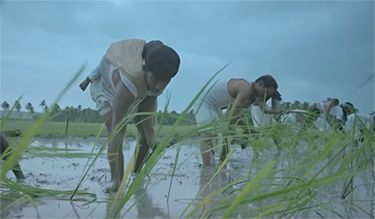 ActionAid India’s new digital campaign is a shout from the rooftops for gender equality in a world, in which the dice is still heavily loaded in favour of men. A series of commercials strive to jolt public consciousness by casting the lights on the differential treatment meted out to Indian women in everyday life and calls on the nation to #ActEqual.

The campaign is made up of three short films of a duration of one minute each that address specific gender issues, like women’s unrecognized involvement in farming and household chores and the girl child deprived of education. The films have been created by the creative team from Dentsu India at the Dentsu Mama Labs and are primarily being shown online and on a limited time slot on India Today TV.

The first film shows male farm hands doing all the arduous chores that women usually do at the farm fields, like planting paddy saplings in knee deep water. Some women are visible atop a tractor in the backdrop. An interlocutor chants statistics, pointing out that ‘Women form over 75 per cent of India’s agricultural workforce, yet women are barely recognized as farmers or farm workers.’ Statistics show that only 13 per cent of women in India own agricultural land, even though they are equally engaged in the back-breaking labour of farming.

The second film shows a long file of men carrying water in metal vessels to their villages from the nearest water body, caricaturizing the real life tradition, where women take on the chore. A voice in the backdrop says, ‘Women spend three to four hours every day to just fetch water, when they can do more productive work in those hours.’

The third campaign shows a young boy doing household chores, like watching over a baby in a cradle, cooking food and washing clothes, after his parents leave for work. Just as he is done with his chores, his sister returns from school. ‘No child should skip school’ is the underlying message in the film. The campaign underscores ActionAid’s agenda of ensuring equal rights for men and women.

All the three films in the campaign highlight the invisibility that exists around a woman's work and contribution to a home and to the society beyond it. Another set of eight videos highlight facts about the silent contribution of women to society, in the role of a home-maker, or as a mother, for instance.

Speaking of the campaign, Swati Bhattacharya, Chief Creative Officer, FCB Ulka, said, “The thought was actually what ActionAid does for a living. These are some of the projects they are working. I chose these projects because they fall in the category of gender equality. This initiative started with the Water Waves campaign in December 2015. It was great working on this campaign. Work like this runs on everybody coming together and that experience was great.”

Elaborating on the brief given by ActionAid, Bhattacharya said, “The whole point being, changing the mind-set of people. How some things have become a blind spot to the society? How do you nudge people to thinking about it? And that was the whole brief given to us.

“It’s like saying ‘yeh ascharya ki baat he ki yeh aapko ascharya lag raha he’ (it’s surprising that you find this surprising). And that thought needs to change,” she said, adding “We’re so shocked to see men carrying water, to see women sitting on a tractor and to see a boy doing house chores. In doing so, we are questioning ourselves on what we think is normal and that’s what needs to change.”