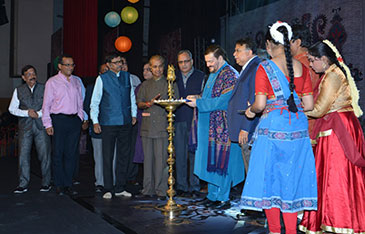 Doordarshan Kendra (DDK) Delhi, in association with the Directorate of Film Festivals, organised an invited audience programme, ‘Sapne Surile Sapne’, as a tribute to legendary singer Mukesh on July 5, 2015. It has now been decided to telecast the show in nine-part series, starting from July 21. The show will be telecast on DD National on week days at 8 am and 4 pm. It is also scheduled to telecast on DD Bharati at 10 pm the same day.

The programme on July 5 at Siri Fort in Delhi was attended by Chairman, Prasar Bharati, Secretary, Information & Broadcasting, Justice AP Shah; Nitin Mukesh, son of Mukesh; and play back singer Manhar Udhas, among others. Nitin Mukesh and Manhar Udhas rendered select songs of Mukesh on the occasion.

A select group of singers also performed at the function. Selection of participants for the show was done through auditions after wide publicity on Doordarshan. The auditions were judged by an eminent panel of judges, including Muktesh Chander, Special Commissioner of Traffic, Delhi Police, who himself is a talented flautist; ghazal singer and composer Jitender Singh; Sufi singer Mahendra Pal; and semi classical singer Pradeep Pallavi, among others.

The first programme in the musical tribute series produced by Delhi Doordarshan was ‘Tum Mujhe Yun Bhul Na Paoge’ on the legendary Mohammad Rafi and was recorded at the FICCI auditorium on July 26, 2014. This was followed by ‘Smarananjali’, a special musical tribute to India’s martyrs on September 30, 2014 at the Siri Fort Auditorium. ‘Gaate Raha Mera Dil’, dedicated to Kishore Kumar, was organised at the Manekshaw Auditorium on November 30, 2014. This was followed by ‘Tujhko Chalna Hoga’, a tribute show for Manna Dey, which was held at Siri Fort Auditorium on April 12, 2015.

Doordarshan Kendra Delhi has been planning and recording musical evenings and telecasting them as a series coinciding with important dates in the life of music legends.