Launches ‘India Ke Hunger Ki Bajao’ campaign along with YRF, Ranveer Singh and Akshaya Patra to urge people to donate Rs 750 to feed a child for an entire year 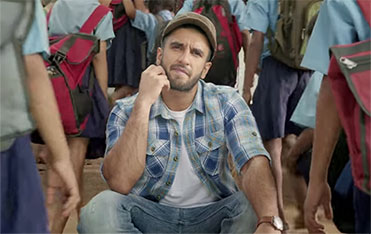 Launches ‘India Ke Hunger Ki Bajao’ campaign along with YRF, Ranveer Singh and Akshaya Patra to urge people to donate Rs 750 to feed a child for an entire year

Ching’s Secret has undertaken a unique challenge to provide meals to school children with brand ambassador Ranveer Singh. The campaign, titled ‘India Ke Hunger Ki Bajao’, is a global fund-raising drive initiated by Ching’s Secret and YRF, along with not-for-profit organisation Akshaya Patra, to appeal to people to donate a small amount of Rs 750 to feed a child for an entire year and to ensure that hunger does not stop children from getting an education.

Conceptualised and created by Yash Raj Films, in association with Bad Clown Productions, this campaign has been digitally integrated and amplified by Fluence India’s leading digital celebrity influencer network.

The initiative will be supported by a high decibel television and digital campaign driven by Ranveer Singh. Through the ‘India Ke Hunger Ki Bajao’ drive, Ching’s Secret and Ranveer aim to raise funds to feed at least 1 million children in India. The actor, who has been personally involved in all stages of development of this initiative over the last six months, plans to go all out and appeal people to donate and support the cause. Known for his effervescence and ‘dare-to-do’ attitude, the actor will kick-start the drive by personally sponsoring mid-day meals for 10,000 children for a year.

Ajay Gupta, MD, Capital Foods, said, “As a company, we’re in a good place. So it is now time for us to give back to the community that supports our brands, and the ‘India Ke Hunger Ki Bajao’ campaign is a step towards this direction. We strongly believe that by educating our children, we are ensuring a better future for our country.”

Ashish Joshi, VP Digital & Business Head, Fluence, added here, “Social media has always led the way when it comes to supporting a good cause. The ‘India Ke Hunger Ki Bajao’ campaign that has been pushed out across the digital landscape is a perfect example of this enthusiastic response. Ranveer Singh’s fans have gone all out appreciating and reciprocating his gesture with their support towards the campaign. They have not only donated to the cause themselves, but have also further spread the message by appealing to their social media circle to ensure  that hunger does not stop children from getting an education.”

Ranveer Singh, the champion of the drive, said, “It gives me the most amount of joy to spread love, to spread happiness. There’s nothing better than to feed a child, to educate a child. I love kids. I especially feel for underprivileged kids tremendously.”

“It’s rare for a Bollywood star to support the kind of work that we do and for someone as young as Ranveer, it’s truly outstanding. We cherish this association and hope he can help us reach out far and wide. Having Ranveer Singh with us feels like we have the country’s youth in our fold, added Shridhar Venkat, CEO, Akshaya Patra.

The Ching’s Secret ‘India Ke Hunger Ki Bajao’ campaign launched on May 27, 2015 with television, radio and digital push and will be aired on all major channels and promoted across the digital medium.