The core proposition has been highlighted in two brand films, developed by Whyness, which premiered during ‘RD Night’ on April 26 at 1 pm 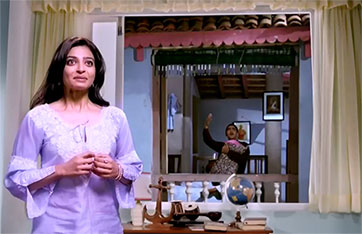 The core proposition has been highlighted in two brand films, developed by Whyness, which premiered during ‘RD Night’ on April 26 at 1 pm

Zee Classic unveiled its brand films highlighting its core proposition of ‘Woh Zamaana, Kare Deewana’ during the telecast of its musical concert ‘RD Night’ on Sunday, April 26, 2015 at 1 pm. The two brand films aim to engage and immerse today’s audiences to the most significant period in the evolution of Indian Cinema.

Designed and developed by Whyness and produced by Abstract Films, the films are directed by Pariskhit Vaidya. They encapsulate the ethos of bringing alive an era of films that not only enchanted, but was also revered by the audiences. Rehashing the cult classic path-breaking films such as ‘Padosan’ and ‘Sholay’, the brand films reconstruct the scenes merged with contemporary situations and characters. Where ‘Padosan’ captures the innocence of love at first sight between naïve Bhola (Sunil Dutt) and his lovely neighbour played by Radhika Apte, ‘Sholay’ captures the thrill and action envisaged by every average adventure seeking Joe.

Speaking on the occasion, Ruchir Tiwari, Business Head, Hindi Movies Cluster, Zee Entertainment Enterprises, said, “Zee Classic is a trendsetter within the cluttered television environment, and its success lies in the truly distinct content. Classics, in its true sense, embody the cultural and cinematic roots that exude timeless warmth transcending generations. Zee Classic, with its tagline of ‘Woh Zamaana, Kare Deewana’, promises to bring home the eternal magic of classic Hindi cinema. However, in order to make the content relevant for today, we are recreating those immersive moments with our brand films that will resonate with our dedicated audiences.”

He further said, “The insight behind our new brand films is simple – classic cinema in its intrinsic value has the ability to transport you to a different world, which today’s films rarely do and that is also in sync with our positioning ‘Bhool Jao Sab Kuch aur Kho Jao Zee Classic ki Haseen Duniya Mein’. With the best collection of movies spanning several eras of Indian Cinema, we are setting out to indulge our audiences to the finest treats.”