We want to infuse more value into the Times Network brand: MK Anand

The CEO & MD of Times Network shares the philosophy behind the recently unveiled rebranding of the network, Zoom’s revamp and relaunch, and more 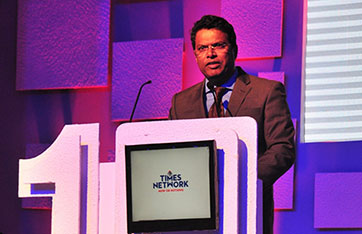 We want to infuse more value into the Times Network brand: MK Anand

The CEO & MD of Times Network shares the philosophy behind the recently unveiled rebranding of the network, Zoom’s revamp and relaunch, and more

Times Television Network has revamped itself as Times Network with a new tagline – ‘Now or Nothing’ – and a new logo. The new logo, designed by Thomas Xavier of Transformers, sports a pyramid with a red dot on the top. Along with the rebranding of the network, entertainment channel Zoom is also set for a new identity and relaunch by the end of May or early June 2015.

BestMediaInfo caught up with MK Anand, CEO and Managing Director, Times Network, in Goa during the recently concluded Goafest 2015 to understand the thought behind the rebranding and the plans ahead for the network. Excerpts:

Who is behind the re-branding? And, what was the brief to him?

It was done by Thomas Xavier, who runs the Bangalore-based brand consultancy Transformers.

The brief was that we are currently strong individual brands which are respected. We want to infuse more value into the Times Network brand, clean it up and make it more contemporary. He has actually interviewed people internally and not just manufactured a phrase. ‘Now or Nothing’ is what we already do. We do it now or there is no point doing it. That’s what it means. We have to be leaders now, otherwise it doesn’t matter to us. It is not an arrogant statement at all. We are saying that ‘we are so 100 per cent now, that it leaves no room or margin for anything else’.

What was the reason for the new brand identity?

We have launched our product at different times and each was launched under strong projects and teams, which stayed on to become teams with certain loyalty and identity. As they increased, it almost became like a tray of brands and the original Times Television Network was more of an address than a brand by itself.

Somewhere down the line, we needed to integrate the company at a thought level that we are not different brands, but one company which has a special affinity and interest for a certain audience group and which also has an internal capacity that we may not have articulated or even realised the competitive advantages, which is playing out in different markets and becoming leaders. In the case of Movies Now and Romedy Now, they are English-speaking urban audiences. And, we are leading against the Star Group. Times Now is leading against NDTV, the word for news television. In three and a half years, ET Now took the leadership position from CNBC, one of the largest monolith media brands in the world.

Are they seemingly different markets? When you look at it, you know that the company has only launched television products in the urban English speaking upscale audience. It is something common already, which we had not articulated. We had to articulate, and that’s why we have the pyramid and the top of the pyramid (in the new logo).

The top of the pyramid means the total Indian population is what television gives you, and the red part of the total population is what Times gives you. The whole pyramid is what the big groups give you, but who is it that actually matter from a particular point of view? Who are informing and entertaining the leaders of India? Indians that lead the other Indians. That is the top of pyramid requirement.

Then, what is common between Romedy Now, Movies Now and ET Now? One, of course, is leadership; two, is this so called top of the pyramid audience; and three, is the new articulation of an existing mantra. There is a deep down desire to do better than the other, and to do that, we need to be so much in tune with now and with what our audiences are wanting. That is what we wanted to articulate with ‘Now or Nothing’.

Why, because I have put in a year now. I came in last year, around the same time. So, among other things, I did two things mainly. One is, we re-organised the company. I think I must have spent more man hours in HR than in any other department in the group last year. I went into very detailed appraisal, including quarterly KRA setting for the top management. I brought the top management into one group, called the Mancom Management Committee, which meets every month and is incentivised on the basis of company performance and individual KRAs. Everybody knows what each other is doing. What we have tried to do is horizontalise the company and have a lot more conversations.

We had a great run in the elections in the first half of the year. H2 is the performance that I would appraise myself on, because six months (October 2014 to March 2015) after I joined, my performance this year is 50 per cent more than last year. Fundamentally, because our ad rates have been corrected substantially. When you do all these things of patching up and everything, you invite people home. And, when you are inviting people home, I just paint the gates new. I am just putting a new name plate, and that’s happening. Amongst other things, I thought it was time for me to tell internally that you no longer are giving Times Now or Romedy Now card, you are giving Times Network. Fundamentally it is a corporate identity and a trade facing name. Nothing is going to change on the channels. I want to make myself be seen as not just Times Now.

You also need to recognise that in the English entertainment space, we have given tough fight to Star. And that too at half the cost. Even from the distribution point of view, we need an umbrella cover to go and say, ‘Network se aaya hoon’.

How will this new philosophy be communicated to your new audiences?

I have three audiences. One is my own people. We have 1,000-plus people, and they need to understand. Half the audience already understands it because they are already doing it. The content and creative teams are already doing it. The support, sales and distribution teams need to get into this habit of ‘Now or nothing’. And, that is easy for me. I need to tell them that you are working for a company where the other guy is dying to break news. I expect you to ensure that anything that can be done now, has to be done now and cannot wait for tomorrow. Simple.

How was the previous year, revenue-wise? And, what are your plans for the year ahead?

We have a very steep number that we have given ourselves. Just before the year began, the Mancom met in Khandala, underwent a breakthrough workshop and I believe in bottom up budgeting, because they own up their targets. And now, the team has come up with a number which is almost double, and we are talking about hundreds of crores double. Because, what I came in at, and what will be next year, revenue-wise – and if I keep that numbers – I would have doubled the company in two years.

Fundamentally, what people know is that our price or our value respect in the market has gone up substantially. People do agree, whether it is Tata Sky or an advertiser or a MSO, they agree that these guys are delivering a fantastic product and yes, we need to start respecting them as a new adult.

Any other specific plans for any of the channels during the year?

Zoom is a big relaunch that is going to happen. The stuffing on Zoom took some time to correct and decide. By end of May or June, we will be relaunching. We are also launching digital in a very big way on Times Now.

Other than that, this year, we have great content coming up. We haven’t had a lot of premieres, but we have four or five of them lined up this year. Romedy Now is on Tata Sky now. So, overall, from a portfolio point of view, Zoom has the revamp and relaunch. On the distribution front, we have already done our job. I am very satisfied with my people. It will only be incremental people now. There is a lot of work in marketing, and that started with the Goafest. So, we are substantially upping marketing spends this year.