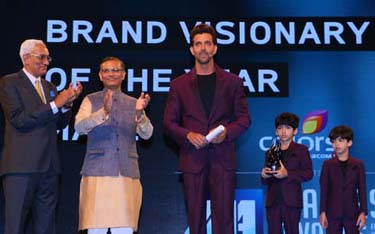 I. Venkat joins the Hall of Fame at the IAA Leadership Awards 2015

The third edition of the IAA Leadership Awards, held by the International Advertising Association (IAA) - India Chapter, took place in Mumbai on April 18, 2015, attended by the who’s who of the media, television and advertising fraternity. The Awards were presented across 12 categories and appreciated outstanding contribution in the fields of marketing, advertising and media.

Reliance Industries, announced the Hall of Fame award to I Venkat, Director, Eenadu Group, along with Srinivasan K Swamy, President of IAA’s India Chapter and Chief Guest at the event, Union Minister of State for Finance Jayant Sinha.

Vineet Jain, while receiving the Media Person of The Year award, said, “It is my privilege to receive this award. It is the recognition of our effort and our vision to achieve leadership in all means of media, including print, television, radio and online.”

CVL Srinivas, who was named Media Agency Head of the Year, said, “I am glad to receive this award and it is all thanks to the 1,500 people who work across the GroupM agencies in South Asia, as I have won this award all because of their hard work and passion. I feel the leaders today should be focused as we are living in a world where there are so many things happening and there is a lot of disruption everywhere.”

Aroon Purie, who received the Editor of the Year Award, said, “It's great to win this. A leadership quality that every leader should have is be large hearted and welcome everything.”

Debarata Mukherjee, Vice-President - Marketing and Commercial, Coca-Cola India and South West Asia, who was named Marketer of the Year in the FMCG – Beverage category, remarked, “Today, the leaders should continuously strive for excellence; probably you won’t get perfection every time, but continue to push for work that works. Sometimes, because of timeline pressures, you submit whatever you can, but as a leader, it is my job to always motivate for one. Also, what plays an important role in the communication industry is to anchor the communication in both sides and do not get enamoured by the execution and forget the actual insight. As a marketing leader, I feel it is about distilling the insight, staying true to the insight, and creating work which works of the insight. It feels amazing to win this award, at the same time I believe that with appreciation, what comes is accountability.”

Sashi Shankar, Chief Marketing Officer, Idea Cellular, who walked away with Marketer of the Year award in the Cellular Phone Services category, said, “It feels great to be appreciated about your and your team’s hard work. The leadership quality that should be there is that ‘Be the change’.”

Yadvinder Singh Guleria, Vice President - Sales & Marketing at Honda Motorcycle & Scooter India, who was declared Marketer of the Year in the Auto – Two Wheelers category, said, “I feel great as after being nominated for the third time, finally I won one! The leadership quality I feel that one should believe in what he/she are doing and in what he/she want to do and encourage the inputs and feedback what one gets from his/her team.”

Sanjay Tripathy, Senior Executive Vice-President, HDFC Life, who was awarded the Marketer of the Year in the Insurance category, said, “It is awesome to receive this award, and it not only motivates us, but also pushes us to give more hard work in the industry that we are in.”

Congratulating the winners, Union Minister of State for Finance, Jayant Sinha, said, “It is an honour to be present in a room full of achievers. Politics is like marketing in many ways. In my experience, I have learnt that Indian consumers are a very different lot, very different from consumers internationally. They are emotional, relational and definitely need value for money – paisa vasool is a must. So, when we are speaking to the Indian consumers as marketers, much as we in politics do, we need to keep these aspects in mind. Having said that, I would like to congratulate the winners tonight, and hope they celebrate their success over years to come.”

Speaking on the occasion, Srinivasan K Swamy said, “It is wonderful to be in the midst of a collection of individuals who are seekers of excellence. I am humbled and proud at the same time. Humbled, because I am in the midst of a distinguished audience and proud, because this is only the third year of IAA Leadership Awards and it has already established itself as an industry standard. I would like to thank for the support I received from Raj Nayak for putting steam behind an award that the industry looks forward to.”

The third IAA Leadership Awards were presented by Colors. Speaking about the initiative, Raj Nayak, CEO, Colors, said, “IAA is undoubtedly the best platform in the industry bringing together creative minds, and the IAA Leadership Awards celebrates the leaders who empower like-minded individuals to push their boundaries with great campaigns and hard work. Associating with the event is an absolute honour, and we would like to extend our heartiest congratulations to the winners for their contribution towards the development of the industry. We look forward to further our association with IAA and continue to applaud the efforts put in by professionals on this national platform.”