IAA Debates: Are agencies reinventing themselves with client needs?

This edition of IAA Debates, held in Mumbai, had Ashish Bhasin, Sameer Satpathy, Sam Balsara and Shireesh Joshi as the speaker 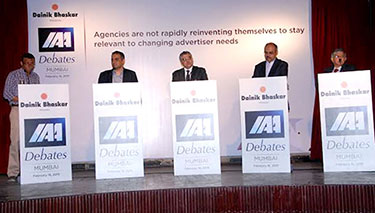 IAA Debates: Are agencies reinventing themselves with client needs?

This edition of IAA Debates, held in Mumbai, had Ashish Bhasin, Sameer Satpathy, Sam Balsara and Shireesh Joshi as the speakers

Starting the debate, Satpathy raised several points to justify that agencies were not reinventing for the changing day and age. Setting the platform for the debate, he noted that as marketers, they were facing challenges in the areas of modern trade, e-commerce and digital. “Today, the medium and the message are merging. Where does one end? And where does the other begin? It is a different ballgame. It is not about taking one medium above the other. It is about how efficiently you take one idea across and serve your purpose,” he pointed out.

He noted that among the three types of agencies, insights agencies were more sorted out, the media agencies were a little better, but the creative agencies were completely out of whack. Making his arguments, Satpathy pointed out that the agencies were a sea of sameness and low margins, which they kept complaining about. “If a client came to you and complained to you about low margins because my product or brand is not differentiated, what you are going to tell him?” he asked. He also touched upon the lack of quality talent plaguing the industry, and asked what the industry had done to attract better talent. Pointing out the ease with which TV films could be replicated on digital, he put the onus on the leadership to start thinking on the lines of: ‘Either we change and disrupt or get disrupted’. He felt that disruption would come from the outside than internally, like a Google getting into this business.

Kicking off the arguments against the motion, Joshi made a list of observations about agencies that have reinvented. “In today’s day and age, there are agencies which have field teams in every state and major city interacting with the clients and working with them like a basketball team, instead of a relay team and waiting for the brief to take action,” he noted. Raising the topic of acquisitions, Joshi felt that agencies had realised that capabilities were needed, but didn’t have the time to home-grow them, hence they acquired and fitted them in. “Over the years, we have even seen them evolve from just a specialist unit to a single window to the client and very rapidly we are seeing it being offered as a single P&L approach to the client. It is not just about bringing in the capability, but also moving forward to the next generation of advertisers,” he added.

Citing examples from the Godrej Group, Joshi reiterated how their existing agencies had found ways to integrate their multiple products in branded content space and optimise the reach across other mediums too. “Traditional media analytics have also changed for the better. We are now looking at attitudes, habits, etc. Technology is aiding us more than ever with research as we see GPS tracking, online panels and neuroscience are helping us measure things that we could not measure before,” he added. Summing it up, he said, “So, agencies have not only got it, but have action. They have taken action at an investment level by acquiring capabilities, structural actions by finding new ways of working and rearranging building blocks and creating new skills. So, whether it is a media agency or a creative agency or a research agency, we are seeing war out on all fronts. I think it is a very exciting world. And, as marketers we are challenged, but we are blessed that agencies are taking such a strong step forward and working with us.”

Bhasin started his arguments for the motion by building on Joshi’s points of agencies delivering artworks faster and how agencies should be integrated, which we were 30 years ago. Reminding about the times when agencies used to take out ads of ‘Advertising Works’, he said, “We just haven’t reinvented ourselves. The earlier we recognise it, the faster will we be able to do something about it rather than just debate it here.”

“All of us can see the digital writing is on the wall. What did we do with that knowledge? We started making nice Power Point presentations to our clients saying digital is important. What did the rest of the peripheral areas to our industry do? A 20 year old kid went out, figured out what Facebook was, set up a social media company. Somebody else figured out how to set up a search engine marketing company. But what did agencies do? First, they denied it. Then they put it on Power Points and then when the new guys had really built it up, they bought their companies for Rs 50 crore and Rs 100 crore and told them why you don’t be a part of my company, so that you can also stop reinventing yourself and be like us,” Bhasin observed.

According to him, “We are actually missing the real big picture because we are not reinventing. We’re smart people, we’re foreseeing the trends, we’re living in denial, but we just don’t have the courage to invent. One of the biggest reasons we are not reinventing is because of the people.” Elaborating on the point, he said, “India has the largest gap in payment remuneration between the highest paid and lowest paid in advertising. We are completely our skewed (towards the top tier),” he added. “Moreover, the average age of young turks (taking decisions in our industry) tends to be 50-55 and the older guys are 70-75. Of course, I have nothing against that, but it is very unlikely that in an industry where the average age is 20-25 years, the average age of decision makers is 60-75 years. How is it ever going to work?”

Coming into the debate as the last speaker, Balsara centred his argument against the motion based around communication and said, “The most powerful argument I heard in your point was about distribution. We’re in the communication business, not in the distribution business. It seems to have become fashionable in many client circles to pass on the blame to agencies. And even agencies, without thinking, are so ever ready to accept the blame. No other business in India has changed as much as advertising or the associate agencies have.”

“Coming to media agencies, there are now highly specialised people in so many diverse aspects of communication. From a full service agency from as recently as 1995, Madison today offers ten separate specialised units of communication services in diversified areas. We don’t have Jack of all trades and master of none. We now have domain experts for that expert insight and advice only from those people. Advertising itself has moved from being mere information to engagement, conversation and storytelling. And, who, may I ask, brought about this change?” he asked.

Starting the rebuttals, Bhasin agreed with Balsara’s point that advertising had changed for the better from 1979, but added, “It is not about change, it is about reinventing ourselves all the time to stay relevant. The problem with us as an industry is that we start believing in the same garbage that we dish out. We’ve just stopped reinventing ourselves somewhere down the line. Accept reality. If you don’t accept reality, you of course will not reinvent yourself.”

Presenting his rebuttal, Balsara added, “In this debate, we’re getting a bit caught up with what is the client’s responsibility and area of operations and what is ours. While it is wonderful to say that we all operate in one continuum and there is no dividing line, clearly, that is just a lot of hogwash. There is a hard line. How many agencies can make recommendations to clients on new business? And, how many clients remunerate those agencies for such recommendations?”

At the end of the debate, following a Q&A with the audience, a vote was taken to identify how many in the audience had changed their positions from the beginning of the debate based on the arguments made by both the teams. Based on the audience’s response over a show of hands, Rangaswami declared the team speaking ‘Against’ the motion as the winner.