The third annual Torch Awards invites young creative talent from the ages of 18-27. There is no entry fee for the Torch Awards 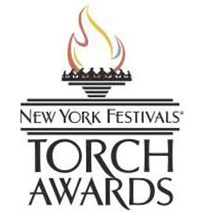 The third annual Torch Awards invites young creative talent from the ages of 18-27. There is no entry fee for the Torch Awards

The 2016 Torch Awards is now open for entry. New York Festivals invites young creative talent from the ages of 18-27 to take part in the third annual Torch Awards, a unique competition that explores a different creative challenge each year and offers mentor training on how to pitch their idea. This year’s challenge is the Inclusive Design Challenge.

Valerie Fletcher, executive director of the Institute for Human Centered Design had this to say about the partnership with the Torch Awards: “IHCD is excited and grateful to be selected as the non-profit partner for the 2016 Torch Awards. Our mission is large and we need the very best talent to generate the ‘aha!’ moment that transforms how people think about the power of design to transform people’s lives.”

The Institute for Human Centered Design, formerly known as Adaptive Environments (AE), was founded in 1978. The Institute for Human Centered Design began with a focus on helping families and communities solve practical problems of the design of places, IDHC has evolved its educational mission to include not only places, but things and information.

“New York Festivals partnered with IHCD for two reasons: First, they’re pioneers in championing the cause of ‘Design that Includes Everyone Is a Human Right.’ Everyone, at some point in their lives, will experience a change in their abilities—whether due to illness, accident, or simply by aging. We support their mission to ‘build a world where everyone can thrive.’ Second, partnering with the Institute for Human Centered Design added a new aspect to the challenge: implementing inclusive design so all can enjoy, participate in, and learn from the work—including our entrants,” said Alisun Armstrong, executive director, Torch Awards.  “New York Festivals’ global footprint extends to 90 countries, and with prominent industry professionals serving on our juries, we are poised to support and showcase IHCD’s mission via the 2016 Torch Awards Challenge.”

Entrants in the Inclusive Design Challenge will present their creative concept for a digital media showcase that presents the inclusive design progress and success stories. This showcase will be used to introduce the Institute for Human Centered Design and the urgent case for practicing inclusive design in the 21st century to a wide range of global audiences at conferences, as part of presentations to global policy makers, and through strategic partnerships. It will be a permanent fixture in the exhibit showroom at the IHCD headquarters in Boston, Massachusetts.

Five Finalist Teams will be invited to New York City to present their ideas. Before they head into the pitch, they’ll fine-tune their work during an intensive work session with their mentor—a member of the New York Festivals International Advertising Awards Executive Jury. The teams will have 10 minutes to pitch their idea to an exclusive jury panel including members of The Institute for Human Centered Design team and members of the New York Festivals Executive Jury.

The Torch Awards was launched in 2014 to champion young creative talent. Young creatives are encouraged to enter and review a brief outlining a marketing opportunity to assist The Institute for Human Centered Design and a chance to see their campaign selected to go live.

There is no entry fee for the Torch Awards. Teams of two to four people 18-27 may enter.