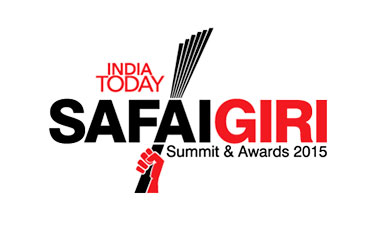 Commenting on the initiative, Purie said, “I was delighted when the Prime Minister nominated me and the India Today Group as an ambassador of the Swachh Bharat Abhiyan. A clean India is such a simple idea, but a revolutionary one.  It will only succeed if all of us work to make it a movement. So many of our ills will be solved if we fix our sanitation. By one estimate, it could increase our average per capita income by 7 per cent. As a media group, we can play a role to raise awareness of this campaign and get people involved. Our first step is the Safaigiri Singathon & Awards. Our aim is to work on an attitude change and bring viewers face to face with uncomfortable facts in an entertaining manner. I am glad that we are not just reporting, but making a difference.”

The India Today Safaigiri Singathon & Awards is a key initiative of the Group’s efforts in realising the vision of Swachh Bharat and in recognising Clean Champions across the country. The Clean Champions have been selected across 13 categories through a process of online entries, field work, and selection by a jury of eminent citizens.

The Safaigiri Singathon & Awards is a platform that celebrates cleanliness champions across India who are engaged in innovative work. It will share best practices in the area of cleanliness and have top visionaries honouring the chosen innovators.

The event will also see singers and musicians performing through the day as part of the Safai Singathon, including Asha Bhosle, Kailash Kher, Daler Mehndi, Sonu Nigam, Hans Raj Hans, Papon and Udit Narayan. The Safai Singathon will be telecast live on all four channels of the India Today Network for over eight hours non-stop on October 2.