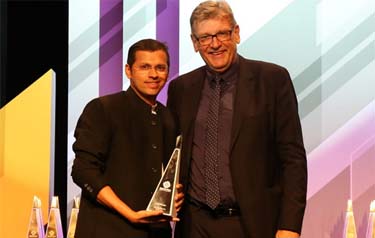 Following three days dedicated to inspiring and enabling creativity, Spikes Asia 2015 concluded this evening with a packed awards ceremony at the Ritz Carlton in Singapore.

Ramesh Deo Productions, Mumbai has also bagged a Grand Prix in Film Craft for the ‘I am Mumbai’ campaign for Bennett Coleman & Co’s Mumbai Mirror. Taproot Dentsu, Mumbai is the creative agency.

Commenting on the wins, Prasoon Joshi, Chairman, McCann Worldgroup Asia Pacific, said, “Awards like Spikes always keep our team at McCann charged up. Our sincere thanks to the jury at Spikes.”

BBDO India’s ‘Share the Load’ campaign for P&G Ariel Matic has won a Gold in Direct, the only win for India in that category.

The ‘Share the Load’ campaign has also secured a Gold in Promo & Activation. BBDO India’s ‘Touch the Pickle’ campaign for P&G Whisper has won a Silver Spike in Promo & Activation. The other winner in this category from India is DDB Mudra. The agency has bagged the metal for its work, The Misunderstood Scoreboard, done for Zee Media Corporation/ Zee News.

Film Craft has also yielded a few wins for India. Apart from the Grand Prix for Ramesh Deo Productions, the category has seen Indian agencies bag one Gold, five Silvers, two Bronzes. Chris Chros Films has won the Gold for its work titled ‘A Street Dog’s Life’ done for World for All. O&M Mumbai is the creative agency. The same work has also fetched a Silver Spike for Chris Chros Films.

McCann Worldgroup India has won a Silver for its work ‘Stand Up’ done for Nescafe Classic. Taproot Dentsu has bagged a Silver Spike for its work titled ‘Hated by Some’ done for Bennett, Coleman & Co’s Mumbai Mirror.

The ‘I am Mumbai’ campaign for BCCL’s Mumbai Mirror has fetched a Silver Spike for Ramesh Deo Productions. The campaign has also bagged two Bronze Spikes in the Film Craft category.

Cheil Worldwide, Gurgaon has won two Bronze Spikes for its ‘Donate a Face’ campaign for Chhanv Foundation in the PR category.

In Healthcare, BBDO India’s ‘Touch the Pickle’ campaign for P&G’s Whisper has won a Silver Spike. The French Horn campaign for Dabur Gastrina Tablets has fetched a Bronze Spike for McCann Worldgroup India.

P&G Ariel Matic’s ‘Share the Load’ campaign has fetched a Bronze Spike for BBDO India in the Integrated category.

DDB Mudra has won a Bronze in Branded Entertainment for its work titled ‘Pray to Lose’ done for Nutralite.

Other Special Awards presented were:

Network of the Year

Agency of the Year

Independent Agency of the Year

Media Agency of the Year