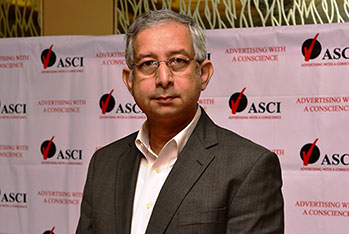 At the board meeting of The Advertising Standards Council of India (ASCI) held on Thursday, Benoy Roychowdhury, Executive Director at HT Media Ltd. and Wholetime Director of Hindustan Media Ventures Ltd, was unanimously elected Chairman of the Board of ASCI. As a member of the Board of Governors for four years, he has represented print media and provided active support to self-regulation.

Narendra Ambwani, outgoing chairman of ASCI, said, “It has been quite an eventful year for ASCI. We had set four key priorities for the year – collaboration with regulators, easier consumer access to ASCI services, inculcate self-discipline among creators of advertising, and be seen as fair adjudicator by all stakeholders. Not only were we able to deliver on all four priorities, we also received recognition for all the good work ASCI that has been doing. The Department of Consumer Affairs (DCA) engaged ASCI as their ‘Executive Arm’ to curb misleading advertisements and has entrusted ASCI to process complaints received on DCA’s portal ‘Grievances against Misleading Advertisements (gama.gov.in)’. The recent launch of our mobile app, ASCIonline, is a major milestone and an example of how technology is helping bridge the gap between ASCI and consumers. The app brought home The Maddies Mobile Bronze Award in the ‘Social / Not for Profit Mobile App’ category. The launch of the e-learning Programme to educate creators of advertisements, and our mega event ‘Creativity for Goodness Sake’ have been our other significant accomplishments.”

Incoming Chairman Roychowdhury said, “There has been a remarkable transition in the last couple of years of how newer sectors like e-commerce and media such as digital advertising have changed the game. Over 90% of consumers send in their complaints to ASCI online or via email versus letters or phone calls. ASCI has also evolved to match the pace by significantly improving the efficiency and speed in ASCI’s consumer redressal process. These continuous efforts are now being backed by regulatory agencies such as the Ministry of Information & Broadcasting as well as the DCA, and more and more government organizations are approaching ASCI to seek help in adjudicating on various complaints related to advertisements. Responsibility for the success of self-regulation rests with every player – Advertisers should advertise with a conscience, Media which carry the ads should be more responsible, and Regulators should back self-regulation by lending their support.”

During 2014-15, the CCC met 47 times and deliberated on complaints against a total of 1,877 advertisements. Of these, complaints against 1,389 ads were upheld, while 486 were not upheld and two were outside ASCI’s purview.  ASCI has been able to achieve close to 90% compliance, which is certainly a healthy figure for a Self-Regulatory Organization.