Pal has been part of Lowe Lintas’ creative team in Delhi for more than six years. He takes over from Shriram Iyer, who was recently named NCD, Mullen Lintas 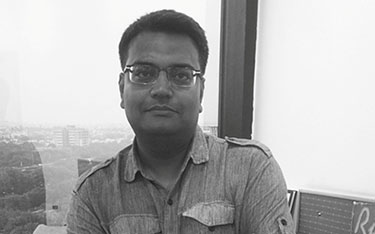 Pal has been part of Lowe Lintas’ creative team in Delhi for more than six years. He takes over from Shriram Iyer, who was recently named NCD, Mullen Lintas

Pal has been part of the creative team in Delhi for more than six years and is involved in the creative execution of a number of notable campaigns for prominent clients in the region. Some of these include Olx, Micromax, Hindustan Times, Maruti Suzuki, Google, and Pernod Ricard.

Commenting on Pal’s appointment, Arun Iyer said, “Delhi has been surging ahead with creative offerings that are top-notch, and Shayondeep Pal has had an integral role to play in its success. With a creative firepower that’s palpable and the thirst to do more, I cannot wait to see what he has in store to drive the office in Delhi. I wish him the best in his new role at the agency.”

Pal has worked on a number of market leading brands over the years. He has been the creative lead on Micromax for the last four years and has worked on campaigns like Sliver 5 with Hugh Jackman, Qube (3D Interface), Canvas HD (Colours Can Come Alive) and Canvas 2. He has also directed a few commercials for Micromax. On Olx, he has done work on the ‘Womaniya’ campaign along with their current ‘Keemat Bhi, Keemti Bhi’ campaign. On Maruti Suzuki, he has worked on Ertiga, the LUV car, and Ciaz. For Hindustan Times, he did a campaign on ‘You Read, They Learn’, which went on to win an award at Cannes Lions in 2013.

On his new role, Pal said, “I am lucky enough to be part of a great team in Delhi. The opportunities are endless and I want to approach it with an open mind. The great thing is that the mandate is clear: how to make our brands famous and, therefore, how to make our people famous. I want to make this place a talent magnet where people would line up to join us. One clear approach would be to look at the creative output from a holistic angle – through new media, unexplored media and not just 30-second commercials.”

Pal began his career in advertising with McCann Erickson 16 years ago as a trainee writer. From McCann, he moved to Grey and spent seven years at their Delhi office. A film commercial for Halonix landed him a job at Lowe Lintas in the year 2008. He joined as Creative Director. In the course of his career, he has handled a host of clients across categories, including FMCG, automobiles, mobiles, e-commerce, food and beverages, apparel, media, consumer durables and technology space.