From conversations to brand engagement - time to grow with Twitter 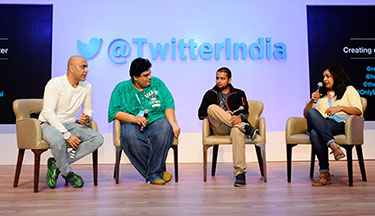 From conversations to brand engagement - time to grow with Twitter

With the growing need and demand for the digital medium among brands, marketers and consumers, Twitter is being used as a platform to engage consumers. The social networking service organised an event in Mumbai on June 30, 2015 around the future of mobile storytelling in India and the emerging uses of Twitter.

There were partners and users from across news, governance, sports, films, TV, comedy and more who shared their inspiring #OnlyOnTwitter experiences.

We are just six years away from a full-fledged digital explosion: Arnab Goswami

Speaking on the important role that Twitter plays in the news and media sector, Arnab Goswami, President - News and Editor-In-Chief, Times Now and ET Now, remarked, “Sometimes the content we show becomes a viral hashtag on Twitter, which shows how digital makes it easy to consume and build engagement on the on-going issue. For example, #Lalitgate went viral though it was not created to be a hashtag but a name for the coverage that we were airing on our channel. I believe that people have got a platform to engage more deeply with the news and media content.”

However, Goswami himself is not on Twitter as he believes that a journalist or an artist likes to operate from a closed and internal shell and engagements sometimes distract them. He said, “I want to focus more on the content and information that I show on my channels rather than getting distracted by what people think about me and my content.”

He also mentioned that though digital was moving and growing at a rapid pace, television still ruled the space. “Television gets me five times larger audience than digital would get, but I can anticipate or predict the fact that we are just six years away from a full-fledged digital explosion,” he added.

When Twitter India’s Rishi Jaitly, who was in conversation with Goswami, asked about the BARC ratings, Goswami stressed that ratings did not move or entice him, but the content and stories did. He said, “Whether it was TAM or now BARC, Times Now has been the leader because of the content it airs on the channel.”

Abu Mathen pointed out that the Ministry of External Affairs was the first ministry to use the Twitter platform and had been optimising it over the years. He said, “Twitter has helped us a lot in terms of sharing information with the people and creating necessary awareness.”

Manan Mehta spoke about how Twitter had been more of a marketing tool to promote the films under the Yashraj banner and engage with consumers for their upcoming releases. “It has helped us in influencing the masses,” he added.

Shaili Chopra noted, “Digital has been driving a strong change in every industry. It helps a lot in storytelling and giving out information to the people. It also helps in grasping the happenings in the industry that you are in.”

Nitish Tipnis stated that with digital shaping the consumers, brands needed to have deeper person to person conversation and engagement with their customers, which would help them to understand the needs and demands of their consumers. “The challenge is that most people do not think before commenting on social media. A platform like Twitter should be used for more logical conversations,” he added.

Shivnath Thukral opined that it was all about inspiration and storytelling for the larger masses. Though senior level people are using Twitter in the best possible way, it needs to be used better by everyone. “Brands have started using Twitter quite effectively as part of their marketing push,” he added.

According to Deepali Naair, “Brands have started allocating a majority of their spends to digital these days, which has had positive results for the brands.”

Twitter India’s Business Head, Taranjeet Singh stressed that it was important to advise the brands to utilise the medium as deeply as possible. When asked about the revenue model, Singh highlighted that Twitter had the most native form of advertising and worked on the ad-sales model when it came to revenue. He said, “The growth in India has been phenomenal and we are transcending a lot of business too. We target and look forward to more evolved conversations on Twitter in the coming future.”

If one is looking for topline television audience ratings data, they need to tweet with the hashtag #BARCTweet followed by the data request, for example, #BARCTweet Top 5 Telugu Programs. The user will receive a reply from @BARCIndia with the data he requested.

When asked whether television was the new focus area, Singh said, “Television has always been a focus area. Television targeting is new in India, but has been a successful model internationally. It is a fact that television is a much-reached medium in India and dominates the revenue pie, so it was important to tap that field to enable more indepth conversations and reach. Interestingly, we got to know the fact that Twitter becomes a second screen while watching television.”