New-age and techno talent will take centrestage in the latest edition of the talent showcase, which will air every Saturday and Sunday at 9 pm 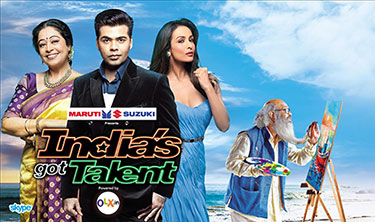 New-age and techno talent will take centrestage in the latest edition of the talent showcase, which will air every Saturday and Sunday at 9 pm

Colors’ premium talent-based show, ‘India’s Got Talent’, returns for its sixth season. Produced by Fremantle Media and hosted by Nakuul Mehta and Bharti Singh, the Season 6 of the show will go on air from April 18, 2015 and will air every weekend at 9 pm. Karan Johar, Kirron Kher and Malaika Arora Khan return as the show’s judges for the third consecutive season.

For ‘India’s Got Talent – Season 6’, Colors has roped in a volley of sponsors, including Presenting Sponsors Maruti Suzuki, Powered By Sponsors Olx, and Associate Sponsors Amul Macho, Layerr Wottagirl, and Ultratech Cement.

With the Golden Buzzer up for grabs, gifting the hunarzaades a direct entry into the semi-finals, talent will go beyond the four walls of the studio and explore the outer landscape to showcase newer elements, including an ‘underwater’ act, a rustic ‘mela’ setup, among others, to bring out the vivid and vibrant colours of life.

Commenting on the elements this season, Manisha Sharma, Programming Head, Colors, said, “Our focus, this season, is to highlight the hunarzaades – whose talent have the ability to enthrall viewers, but who have been largely unacknowledged in their growing years. The talent we have seen are those which have had the courage to follow their heart and vie for success. Karan Johar, Kirron Kher and Malaika Arora Khan are the three jewels in the ‘India’s Got Talent’ crown, which have sieved out the best of the best talent over the years, and we are pleased to see them raise the bar this year as well. Be it the Golden Buzzer or just leaving the judges spellbound, this edition of ‘India’s Got Talent’ will feature new-age and techno talent that will leave viewers awe-struck.”

As new-age talent takes the forefront, the look of ‘India’s Got Talent’ will adopt a similar flavour. Unique elements like home videos of the contestants showcasing their journey of talent discovery, social awareness on a personal and universal level, and a ‘Khulasa’ segment which will reveal some personal quirks of the judges, have been introduced this season.

Commenting on the show, Anupama Mandloi, Managing Director, Fremantle Media, said, “‘India’s Got Talent’ has evolved over the years to become a show that defines talent in its true form. This year, our approach is to focus on talent and their ability to transcend thought boundaries to present the unexpected. With talent and an element of challenge being the spotlight, we are looking forward to defying traditions and welcoming a new wave of talent that will be India’s answer to the world.”

To enhance engagement and involve viewers at every stage of the show, an integrated marketing and digital campaign has been chalked out incorporating multiple mediums, including television, mobile and cinema, among others. The digital campaign will have the ‘Challenge Pappu Campaign’, wherein the character of Pappu will throw challenges at the viewers and in the process will bring out some of the most outstanding talents to the fore on social media. With extensive mobile penetration in smaller towns, the promos of the show will be pushed via MMS’s across key markets, along with YouTube. Additionally, the show will dominate the IPL online and OnMobile space via Starsports.com and Hotstar.