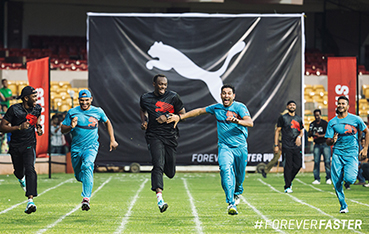 In conversation with some of the best runners from around the country, and in the presence of media, in Bengaluru, Bolt spoke about his favourite racing memories, his special relationship with coach Glen Mills and his love for cricket and football. He delighted the audience with a grand entrance that was preceded by a video montage of some his most thrilling victories.

“Forever Faster is a great slogan, it describes me perfectly. I’m overwhelmed by the love shown by the people of India and I’m thrilled to be here as a Puma ambassador,” Bolt said.

“Forever Faster - the new brand positioning is about Puma reminding people that it is and will continue to be the fastest sports brand in the world,” said Rajiv Mehta, MD, Puma India.  “We’ve always been known for our risk-taking as a brand and that will remain our ethos. Forever Faster clearly represents that and allows us to make a statement as a brand. Having the fastest man in the world here in India to launch Forever Faster – Usain Bolt himself – we could not have it any better,” he added.

As the day progressed, Puma brought Bolt to Chinnaswamy stadium to play the country's most popular sport with south-paw Yuvraj Singh. In a unique cricket game umpired by former cricketer Ajay Jadeja, and featuring popular cricketers Harbhajan Singh and Praveen Kumar, the Olympic sprinter showed thousands of adoring fans why he almost became a legendary cricketer, before becoming the fastest man on Earth. The exhibition match also saw a race-off between Bolt and Yuvraj Singh, to see who could run faster on the track, as well as a power-hitting challenge. The two legends interacted with fans through headsets as they were playing and the on-field banter entertained fans thoroughly.

In an exclusive interaction at the Chinnaswamy stadium before the match, Puma lived up to its promise of specially rewarding winners of the Puma School of Speed. The eight lucky national winners and their coaches were flown down from Delhi to meet and run with Bolt.  Known for being at his best around children, the World Champion lived up to all the expectations.