Premiering on April 16, the show will be telecast every Wednesday and Thursday at 10pm 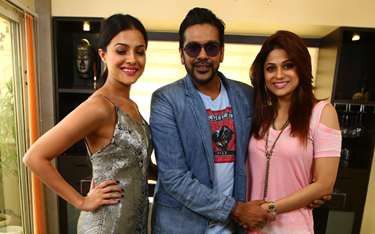 Premiering on April 16, the show will be telecast every Wednesday and Thursday at 10pm

Style & the City, one of the most successful shows on Fox Traveller returns to the small screen with some of Bollywood’s biggest stars. A fashion based travel show, Style & The City Season 2 will bring together fashion guru’s - Rocky S, Nikhil Thampi and Shantanu & Nikhil and Bollywood’s style icons like Shilpa Shetty, Kalki Koechlin, Harman Baweja, Richa Chadda, Yami Gautam, to give fashion an all new definition.

The new season will feature designers on a fashion journey through the various cities of India, to create a unique outfit for a celebrity, inspired by a personal memento from their life. Watch the leading designers bring alive their celebrity clients wish only on Fox Traveller starting April 16, 2014, every Wednesday and Thursday at 10pm.

In this new season of Style And The City- the designers along with the spunky & stylish show host - Kirat Bhattal will tour the cities of Kutch, Pune, Kohlapur, Goa, Sawantwadi, Hyderabad, Pochampoli, Chennai, Pondicherry and Kanchipuram to find inspiration for their designs. From hand-woven kunbi sarees of Goa, to the marbling technique on fabric in Pondicherry, to traditional saaj jewelry of Kolhapur, to rare art form called ‘Rogan art’ of Kutch, and ancient card game called ‘Ganjifa’ of Sawantwadi - the designers will have a lot to pick from to add a zest of life in their outfits. The show will be an exciting mix of tanga rides through the streets of Kolhapur, eating traditional sit-down South Indian meal on a banana leaf in Kanchipuram, riding the Harley Davidson through the White Runn of Bhuj and many such enthusing experiences.

Talking about the new season of Style And the City, Debarpita Banerjee, Vice President- Marketing, Fox International Channels said, “At Fox Traveller we are constantly evolving our content and programming to bring alive the different facets of travel. With Style & the City, we are discovering fashion through travel. Season 2 promises to be bigger with more cities, bigger Bollywood celebrities and more importantly an interesting challenge for the ace designers of India – creating outfits inspired by a personal memento from the celebrity’s life. We are sure the new season will be a hit among travel and fashion enthusiasts alike.”

Talking about his second stint with Style and the City, Rocky S said, “This is my second season with Fox Traveller’s Style and the City and I had a blast all over again. New cities, new challenges, delving deep into markets, streets and artisans' workshops has been yet another exhilarating and amazing experience.”

Expressing his thoughts about the show, Nikhil Thampi said, “Being part of Style & the city has been a life changing experience! For someone who has never had a formal training or been to fashion school, this felt like it was my chance to catch up on all those missed opportunities. From travelling to new cities and exploring the local culture to visiting bazaars, interacting with the locals, and understanding & incorporating their techniques, weaving fabric and treatments in my own creations, it’s been a fabulously exciting challenge.”

Sharing their experience, Shantanu & Nikhil said, “The show, Style and the City on Fox Traveller is an amazing way for us to explore incredible places in India and use it as the background to create fashion.”

The SATC new season is presented by Lawman Pg3 and powered by Lotus Mattegel.