Comedy Central lights up lives with ‘Spread the Cheer’ campaign 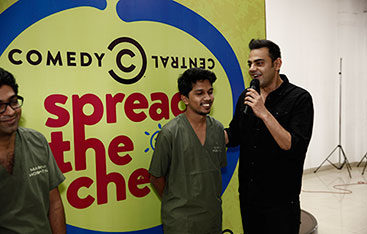 Comedy Central lights up lives with ‘Spread the Cheer’ campaign

Taking forward the promise of inducing happiness one laugh at a time, Comedy Central mobilized India to spread happiness through one random act of kindness at a time. Bringing this movement to life through a unique ‘Spread the Cheer’ campaign, Comedy Central took the season’s celebrations to various parts of India to NGOs, Apollo Hospitals, Drug Rehabilitation Centers and Jails.

Commenting on the campaign, Ferzad Palia, General Manager & Executive Vice President, English Entertainment, Viacom 18, said, “Christmas is the season of giving and we’ve taken this a step further with our ‘Spread the Cheer’ campaign. The idea was to break away from regular TV programming and undertake a campaign that gets India to smile more! We got our funniest men on the job and managed to spread some laughter across schools, hospitals, NGOs, drug rehabilitation centers, old age homes, orphanages and even jails. We hope we’ve achieved our endeavor to touch people’s heart and leave a smile at every place we visited while encouraging them to pay it forward with their own random acts of kindness.”

Comedy Central hosted a laughter-inducing evening with Cyrus Broacha at Apollo Hospitals and schools in Bangalore, Bharti Singh, Amit Tandon and Zakir Khan at Tihar Jail and a few NGOs in Delhi and Cyrus Sahukar at Make a Wish foundation, Teach for India and drug rehabilitation centers in Mumbai. These renowned and immensely talented comedians engaged in interactive sessions with the unique audiences and encouraged them to participate in fun activities and celebrate the festive season with laughter.

To take this initiative forward the channel also has a TAB on their Facebook page asking people to share their good deeds while encouraging others to go out & spread the cheer. The channel’s ‘Spread the Cheer’ campaign is supported by a 360 degree promotion plan which includes an extensive online leg, PR activations, Radio promotions, trade awareness campaigns and so much more.