NDTV-Aircel launch the ‘Save Our Tigers’ Signature Drive 2014

Aimed at collecting 1 million signatures for the Tiger Agenda 2014, the drive will culminate on The Word Tiger Day, July 29, 2014 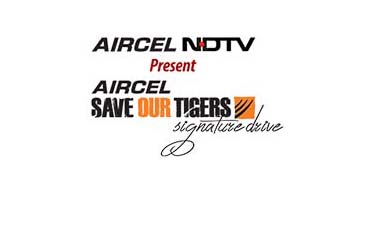 NDTV-Aircel launch the ‘Save Our Tigers’ Signature Drive 2014

Aimed at collecting 1 million signatures for the Tiger Agenda 2014, the drive will culminate on The Word Tiger Day, July 29, 2014

Carrying forward the mission to ‘Save Our Tigers’ - the largest and the most comprehensive media campaign on tiger conservation till date, NDTV and Aircel  announced a Signature Drive 2014 on World Environment Day asking for public support for the Tiger Agenda. This agenda, encapsulating immediate action points for the government, was drafted in consultation with wildlife experts.

Launched in April 2014, the 3rd season of Aircel-NDTV ‘Save Our Tigers’ successfully set this year’s tiger agenda during a panel discussion hosted by Vikram Chandra, Group CEO, NDTV Group. The Signature Drive 2014 aims to gather 1 million signatures for the Tiger Agenda 2014 which makes 6 key demands - 1) Involve Local Communities in Conservation; 2) Strengthen and modernize the forest department to step up protection; 3) Improve Man-Animal Conflict Mitigation Measures; 4) Increase protection of buffer zones and corridors; 5) Zero tolerance approach to poaching and 6) to make political parties accountable for loss of bio-diversity. The signatures collected will then be taken to Chief Ministers of key tiger states.

The signature drive also has the support of Sanctuary Asia and Wildlife Conservation Trust as knowledge partners for the campaign. The drive will culminate on The Word Tiger Day, July 29, 2014 across New Delhi, Mumbai, Kolkata and Chennai.

With the launch of the signature drive, Vikram Chandra, Group CEO, NDTV Group said, “The tiger has always been close to NDTV’s heart, it is a key part of our eco-system and if we fail to save the tiger, we risk losing everything else. NDTV and Aircel have now come together for the 3rd season to create awareness and spread the message of conservation.  This year we hope lots of school children, youth and concerned citizens will come together to pledge their support to our national animal by signing our tiger agenda.”

On the launch of the signature drive, Anupam Vasudev, Chief Marketing Officer, Aircel said, “Aircel started the ‘Save Our Tigers’ initiative in 2008 to create awareness about the plight of our national animal. It was extremely heart wrenching to see how the tiger had come so close to extinction and we had come to face the unfortunate prospect that our future generations will only be able to see tigers in photographs. As we were faced with the blatant reality, Aircel started work on the ‘Save Our Tigers’ campaign with noted conservationists and experts across various on-ground projects with an aim to ensure healthy and sustainable ecological balance in the country.  To take this initiative to the next level, Aircel and NDTV have come together for the third time to gain public support towards six immediate action points of Tiger Agenda 2014. We are hoping that this time as well, the people of India will come forward and pledge their support to saving the tigers in huge numbers and do their bit to keep the tiger roaring.”