The IPL marketing campaign is being promoted in 21 publications and 11 radio stations across India. Well spread out mall activations, social media, apps, and a nationwide travelling bus, everythin is IPL ka Bulavaa 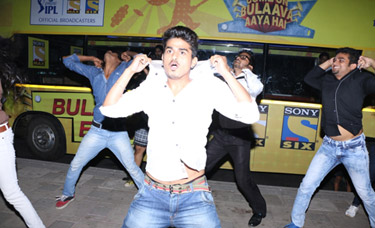 The IPL marketing campaign is being promoted in 21 publications and 11 radio stations across India. Well spread out mall activations, social media, apps, and a nationwide travelling bus, everythin is IPL ka Bulavaa

Multi Screen Media (MSM) has pulled out all stops, launching a plethora of innovative marketing initiatives this season to entice viewers to the most entertaining cricket tournament of the year, the Indian Premier League (IPL). In spite being marred by controversies and the clash in timing with the ongoing General Elections, the IPL fever continues to grip the nation.

The first leg of the marketing campaign saw the launch of ‘Come on Bulaava Aya Hain’ with two TVCs being rolled out to promote Sony Max and Sony Six as the official broadcasters of Pepsi IPL. A set of four films has been made under this campaign, each one highlighting the fact that no one can resist the call of the IPL.

The digital platform is used by broadcasters to engage with the viewers and create buzz for the Pepsi IPL. Extraaa Innings T20 (EI T20), the flagship match analysis for Pepsi IPL, has been integrated with the Twitter platform. One of the most interesting integrations is ‘Tweet to unlock’ where viewers of the show will have a chance to unlock exclusive EI T20 content on-air by tweeting with #eit20 hashtag. ‘Twitter Mirror’ will facilitate the hosts, cricketers and celebrity guests to tweet candid pictures and share customised messages from the sets of EI T20 through the @sonymax and @sonysix hashtag account. An ‘Interactive Q&A’ initiative will allow fans to interact with the panellists and guests on the EIT20 show and ‘Vine Videos’ will give them a sneak peek into the making of the show.

A new mobile app named ‘Cricket Ka Bulaava’ was launched by WATConsult in partnership with MSM on Android, iOS and also on the web for desktop users. This app allows users to set reminders of their favourite team’s matches and has an extensive ‘Downloads’ section which allows them to download IPL schedules, ringtones, wallpapers and photos of all the IPL action. The ‘trivia’ section of this app allows easy sharing of the content on Facebook and Twitter.

In print, IPL is being promoted in 21 publications across the country. The IPL radio campaign is running successfully across 11 stations and they have launched an innovative and clutter-breaking campaign called ‘Turn off the Radio’ with Radio Mirchi 98.3 FM. This has managed to catch the interest among the listeners because this is contrary to the Mirchi jingle ‘Turn up the Radio’ which rules the airwaves. The sudden disappearance of the RJs from the Mirchi studios to watch the match has also created a lot of buzz around IPL7.

Vaishali Sharma, VP - Marketing & Communications, Sony Max, said, “Each of the campaigns, by MSM is a hit and has its own impact. The TVCs and the radio activations have been very well received this season as they continue to strategically position IPL as the largest entertaining cricketing event. Innovations have been executed in the several on-ground activities and in the digital space, and it was fun as we kept pushing our levels of creativity.”

Taking this year’s ‘Come on Bulaava Aya Hain’ forward, MSM has organised several unique on-ground activations on a national scale. To start with, is the ‘Bulaava Express’ which is a bright yellow, open bus, is travelling across 13 cities to connect with all IPL fans. The tour was flagged off in Mumbai on April 13 and its last halt will also be Mumbai. Entertaining activities like the ‘Buckram dance’, an energetic dance done by a troupe to popularise the campaign track and the Buckram move, the ‘Buckram ka Chukrum’, fun games and IPL based trivia to check the participants knowledge of the tournament and the ‘Buckram Bahaana’, where the contestants enact one thing which they have left in the middle because they had to rush to watch IPL match have been arranged inside the bus.

Mall activations have been planned across 13 cities, two malls each in Mumbai and Delhi, and one mall each in the rest of the cities. Along with the other Buckram fun activities,  ‘Buckram Hunt’, where participants search around the mall for IPL goodies and ‘Buckram pe Buckram’, where there is a 10-feet, giant size collar cutout and people come and write ‘Iss baar kaunse team ka Bulaava aya hain’, have been specifically arranged for the malls.

In Mumbai, the broadcaster had installed a mammoth TV remote which read ‘Remote Daba, kar Mazaa’. As soon as someone pressed the button, the Pepsi IPL bugle sound played out, followed by various activities related to the game. Photographs with all the representatives who pressed the button were taken and Pepsi IPL merchandise was distributed. Fun games like ‘Guess the Act’ and repeat the words ‘Pepsi IPL on Sony Max & Six’ as many times as possible in 30 seconds took place. All the winners were gratified with IPL merchandise. Those who uploaded the videos and snaps of the events on social networking sites were also given IPL goodies.

Among the other activities is the ‘Score Kya Hua Hain’ where the channel will surprise people by going door-to-door and asking them the score of the match. Whoever is watching an IPL match at that time and knows the score will be rewarded with Pepsi IPL merchandise instantly. These activations have also been planned across 400 LCI towns in Uttar Pradesh, Madhya Pradesh, Gujarat, Maharashtra and Rajasthan.

Sharma said, “Every year we raise the notch with unique and innovative activities, which not only engages our viewer but also creates a lasting impression on them.”

Brand experts feel that IPL7 will continue to garner good eyeballs and the controversies won’t have any effect in the viewership.

Anand Halve, Co-founder & Director, Chlorophyll, said, “Indian public’s mind is ‘teflon coated’ - nothing sticks - so till the time they are getting entertainment be it in the form of corrupt politicians or players, they will make fun and criticise but will still watch it.”

Halve further said, “When Lalit Modi introduced the IPL cricket format to India, it was a rendezvous with film stars, until it was replaced by the ‘war-like attitude’ between teams. However, IPL for the last few years has a new take and it says ‘Leave your work and watch IPL’. This is a different perspective, but not a fresh one.”

Harish Bijoor, CEO, Harish Bijoor Consults, said, “As the venues have shifted abroad for phase 1 of the IPL matches, fans can’t go to the ground to watch the match live. IPL has become a virtual game, so it is more TV viewing and less ground activations this year.”