National Geographic signs John Abraham as face of the channel 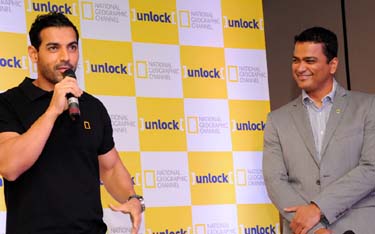 National Geographic signs John Abraham as face of the channel

National Geographic Channel has signed model and actor John Abraham as the face of the channel. In a press conference in Mumbai on Friday, September 27, the channel unveiled its new campaign featuring John and unveiling the new philosophy of 'Unlock'.

"Unlock to some would mean just to opening a door. But to us at National Geographic it means living life without fear, without judgement, without a narrow outlook, prejudice and apprehension. It means living life without conforming to the boundaries that other people set for us. It means being open to new cultures, new experiences. Our shows unlock imagination, they educate and entertain. We unlock knowledge. We have shows to unlock the truth also. Which is why the philosophy was the most appropriate one for the channel," said Keertan Adyanthaya, Managing Director, NGC and Fox International Channels.

The campaign comes at a time when the global brand, National Geographic Society, is celebrating its 125th year.

The choice of Abraham as brand ambassador was justified by Adyanthaya as the actor is enthusiastic about trying out new things. An avid biker, Abraham is also into touring and safaris and has been involved with wildlife preservation in the past.

"It is an honour for me to be here as I have lived the philosophy of National Geographic forever. I look forward to take Nat Geo viewers through the various aspects of the campaign, encouraging them to unlock their minds along the way," said Abraham.

It is a complete 360 degree campaign that includes TVCs, print and outdoor, and lays a lot of emphasis on digital. Abraham himself is active online, replies to tweets and FB messages. All the campaigns will be mostly about dropping boundaries, prejudices and perceptions. The channel will activate Abraham in different shows, as and when they happen. Next up will be ‘Supercars’, which suits John Abraham's liking for fast vehicles.

Another innovative activity the channel plans to do is 'Unlock summer camps' for children. Since children have a lot of fear of heights and darkness, the channel will host summer camps in different schools on a paid-for participation process. For the youth, there would be an 'innovation conclave' in January as well.

"There are a few things that even iconic brands need to do. They need to keep spreading their own religion and their message so that it encourages, enlightens and mobilises the youth," said Debarpita Banerjee, VP – Marketing & Communication, Fox International Channels.

The channel considers that most of its shows reflect the philosophy of 'Unlock'. The recent show, 'The Emergency Room', was about unlocking the way people think, especially about road rage victims. With the help of Delhi Police they managed to get across the idea that helping a road rage victim will not lead to trouble for the common man.

Among the new shows is 'Inside IPL' which will show the behind the scene activities of the IPL franchise, the locker room, the training, etc. This will go on air just before the next season. ‘Brain Game’ would be another new series which will showcase a new, interesting way of looking at mundane things. While Inside IPL and Emergency Room are original Indian productions, the others are in tune with what Nat Geo programmes internationally.