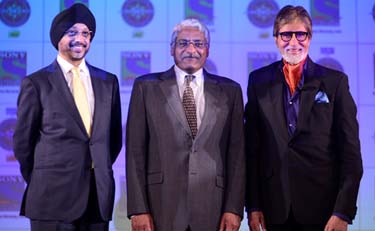 Sony Entertainment Television's big draw for the season, Kaun Banega Crorepati 2013, was formally launched by Amitabh Bachchan with an entertaining mock quiz round on Thursday, August 29, 2013 in suburban Mumbai. The show, in its seventh season now, and the fourth on Sony, will be aired from September 6 at 8.30 PM. The show will have 36 episodes spread over 13 weekends.

To make sure that the audience's interest is maintained in the current clutter of reality shows and various other options, the format has been changed a bit. For starters, the set which was so far shot in Film City has been shifted to Yashraj Studios. Instead of the familiar soundtrack to announce the show, there will be a new music with Indian instruments.

Announcing the change, Sneha Rajani, Senior EVP and Business Head, Sony Entertainment Television, said, "The reason for the shift was simple. We have been trying to get Yashraj for quite some time but could not since they were booked already. It's better suited and much bigger. There are a lot of changes which will blow your mind. We don't want to be a 'me-too' but we want to start something new."

Not just the set, the format of the show itself would see some drastic changes. The maximum amount which can be won this season has been increased from Rs 5 crore to Rs 7 crore. This goes well with the fact that show is on its seventh season now. The 'sapta koti sandook' will feature four questions – giving the contestants a chance to go from 1 to 3 to 5 and finally 7 crore. The total number of questions would be 15.

The changes don't just stop there. The basic format remains the same, with certain tweaks here and there. In the fastest-finger-first round, instead of one question there will three questions asked this time. The person with the maximum correct answers in the minimum time will get to sit in the hot-seat.

Lifelines will also see a sea of change. Instead of the popular 'Ask the expert' and 'Double dip', the old lifelines of 'flip the question' and '50:50' would make a comeback this season. A new lifeline has also been introduced – a Power Paplu, which will work as a joker in a deck of cards. A contestant can choose to reuse any lifeline he may have already used in the game (but not in that same question) with the 'power Paplu'. However, the maximum number of lifelines one can use during the game is limited to four. The time for answering the questions would also increase as would the phone-a-friend time limit.

"We wanted variety and change in the format. You may have noticed that KBC has been adapted to regional media as well. As a matter of fact, all over the world there is a demand. We had to do something different to innovate, put India as an example. It will highten drama, the engagement, the competition," said Siddhartha Basu, CMD, Big Synergy Media, which produces the show in India.

The show will also have the opportunity for other fastest-finger-first participants who do not make it to the hot seat. There would be one winner in each episode who will answer the maximum questions correctly in the minimum time taken. This person will go home with the prize money of Rs 1 lakh. There will also be a 'Ghar baithe jeeto jackpot' whereby television audiences can answer questions asked specifically for them during the show.

The show has promoted learning through its marketing campaign. NP Singh, COO, Multi Screen Media, said, "We have made certain changes this year. The brand new music and redesigned set have been done keeping in mind rejuvenation and reinventing of the format. I am sure the theme of 'Seekhna bandh to jeetna bandh' will encourage people and this will become appointment viewing for everybody."