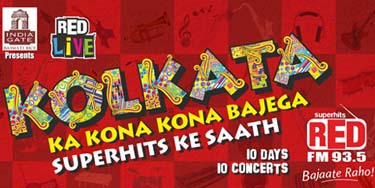 The land of music legends began witnessing 10 nights of musical revelry beginning last Tuesday, April 18, as 93.5 Red FM celebrates 10 years of airing super hit music in Kolkata. The series of concerts will be hosted in localities across Kolkata culminating on May 5 at an eminent venue with a performance by Bollywood singer Shalmali Kholgade of Ishaqzaade, Race2 and Cocktail fame, among others.

This, however, is just the beginning of the festivities, and will be followed by something even bigger, to be revealed in due course.

Nisha Narayanan, COO, Red FM, said, “Kolkata has given the nation some of the finest music maestros. It is a joyous moment for us to complete 10 years in a city that boasts of such rich heritage and culture. And we have come up with an equally grand concept to celebrate this occasion. Under the Red Live wing, we have undertaken this initiative of giving the city 10 live music concerts in 10 days. We are sure that the city and all our listeners would enjoy this festival immensely.”

Red Live is Red FM’s foray into the live concerts and events space. This initiative was launched last year. Popular celebrities in Kolkata will also be attending these events. The entire activity will be promoted via print, television and outdoor media including hoardings, canter and in multiplexes.