Grey is Agency of the Year; Green Crusader award goes to Kartikeya Sarabhai 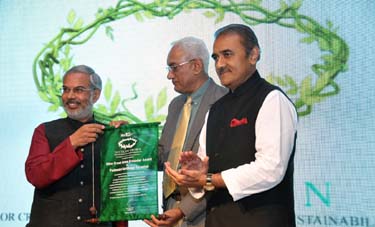 Grey is Agency of the Year; Green Crusader award goes to Kartikeya Sarabhai

Launched in 2011, the IAA Olive Crown Awards are India’s first (and possibly the world’s) award for creative excellence in communicating sustainability, or ‘green’ advertising. The awards night of the third edition was held yesterday in Mumbai.

The event saw many marketing and media heads and other industry leaders gracing the occasion. Among them were Hrishikesh Mafatlal, R Mukundan of Tata Chemiclas, Suresh Bandi of Panasonic India, Kushal Desai of Apar Industries, Mukund Rajan of Tata Sons, Rahul Welde of Unilever, Raj Nayak of Colors, Siddharth Kothari of Rajasthan Patrika, Neeraj Roy of Hungama, Neville Taraporewala of Microsoft, to name a few.

The IAA Olive Crown Awards have grown in stature since inception and this year the number of entries had not only tripled but also witnessed pan-Asia participation.

MG Parameswaran, ED & CEO of Draftfcb Ulka and Chairperson Olive Crown Awards 2013, said, “We saw an almost 45 per cent increase in the number of entries this year and our Awards Jury consisting of veterans like Sonal Dabral, Pops Vinod Rao, Chax, Ramki and Charles Victor were of the opinion that the quality has also seen a dramatic improvement over the years.”

Srinivasan Swamy, Chairman RK Swamy BBDO and President, International Advertising Association, India Chapter, said, “There has been widespread acceptance of these awards as corporates see the green message as a key differentiator in a competitive environment. Going green is no longer a luxury but an essential part of doing business. We are delighted to see that clients are roping in agency partners to help them build green awareness for their brands.”

Padmashri Kartikeya Sarabhai was conferred the Olive Crown Green Crusader Award, an award which is presented to an individual who has dauntlessly fought the battle for going green.

The Green Hungama Award, open to participants under 30 years of age where the task was to create a 60-second green film, was won by Abhishek Saxena of Webchutney.

A total of 35 awards were given out. Some of the big winners were Grey Worldwide, O&M, Cheil, BBH, Umbrella Design, DDB Mudramax, JWT and Draftfcb Ulka.

The big award of the night – Campaign of the Year – went to Cheil Worldwide for Samsung Printers. Kewal Kiran Clothing won the Advertiser of the Year award for its Green Turn Water Saver Jeans. Its agency Grey was named the Agency of the Year.

Olive Crown Awards which was born three years ago as a show at Goafest 2011 is now an award show that will prominently feature in client and agency schedules.