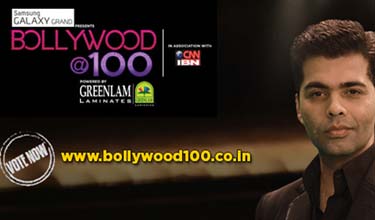 HISTORY TV18’s second local production ‘Bollywood@100’ prepares to enter an exciting phase with the announcement of the nominees for an unprecedented Bollywood poll in the history of Indian cinema. Every year dozens of film awards nominate and felicitate best performers. But for the first time, cinematic icons and legends across distinct generations will compete against each other in a nationwide poll.

The first-of-its-kind Bollywood poll will see megastars like Amitabh Bachchan, Shah Rukh Khan, Aamir Khan, Balraj Sahani, Raj Kapoor, Dilip Kumar and others compete for the ‘Best Actor’ title. The list of divas for the ‘Best Actor (female)’ position is a unique blend of timeless beauties like Madhubala, Waheda Rahman to powerhouse performers like Smita Patil, Nargis to current sensation Vidya Balan. While the iconic RD Burman faces tough challenge from A. R Rahman in the Greatest Composer category, distinguished directors like Guru Dutt, Hrishikesh Mukherjee and Raj Kumar Hirani lock horns on who’s the ‘Greatest ever’. The poll pays tribute to the iconic Hindi film industry and is HISTORY TV18’s endeavour to stimulate discussion amongst public towards finding the greatest cinematic super achievers.

Renowned, Producer Director Karan Johar the host of the show said “Everyone has a personal favourite, that one movie we love and that one film personality be it an actor, director or singer we absolutely idolise. Just from the internal debates among the team, I've got a real sense of how passionately people feel about these legends. We hope that the series will provoke debate and encourage people to cast their vote for the Greatest among our Industry.”

Speaking on the occasion, Ajay Chacko, President, A+E Networks | TV18, stated, “Bollywood@100, our second local production is an effort which is uniquely in sync with our philosophy as a brand and the objectives we hope to achieve through our content. While on the one hand the show helps generate interest across generations in an informal and entertaining way, on the other it epitomises best our brand values of success & achievement- of making History Everyday. It would have been a daunting task to select the Great Icons, and we are thankful for our jury to have helped us with this.”

In addition to the poll, Karan Johar will disclose ‘Untold stories of Bollywood’ every Friday at 9 PM. on HISTORY TV18, as movie legends and present day stars disclose unseen & unheard facts. Bollywood@100 is the ultimate disclosure of never revealed facts behind blockbuster movies, most admired actors and music sensations.

Through a month long digital & mobile voting campaign, the series stimulates viewers to nominate and vote for their personal favourites across various categories in order to arrive at the ‘Greatest Ever’ in Bollywood. Along with the nationwide poll, and the Eminent Jury vote a panel of Film Aficionados would help select ‘the Greatest Ever’ in each category. Each mode will have an equal one third weightage. The entire process will be audited by Grant Thornton. The initiative will culminate with the announcement of the winners in each category in a televised show in May.

To cast your vote for Greatest Bollywood Icons visit www.bollywood100.co.in