It was a series of live radio shows from studios fabricated on billboards! 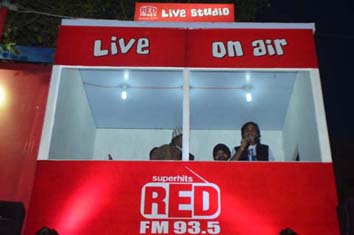 It was a series of live radio shows from studios fabricated on billboards! BestMediaInfo Bureau | Delhi | February 28, 2013

Take a popular RJ, his on-air prankster alter ego ‘Bauaa’, a wish to connect the RJ directly with his adoring audience, the never-say-die attitude of DDB Mudra Max, and you have an incredible event Bauaa Hawa Mein, a series of live radio shows by 93.5 Red FM from studios fabricated on billboards!   The objective was to popularise Red FM Delhi’s evening show host RJ Raunac’s character Bauaa through an OOH medium that allowed for live performance and face-to-face interaction with the audience and fans. The idea was to have Bauaa seen, and not just heard, for the first time. And the execution was literally from up in the air.   There were several challenges of which fabrication was just one. Hoisting a 100 sq ft live-broadcasting, fully equipped studio in mid-air, was not easy. Managing permissions from all the authorities involved, ensuring security to the performers and preventing crowd misadventures in high-strung Delhi had all the makings of a nightmare. Not just one, but three of them!   To connect to the listener, live studios were set up at three different locations of the NCR. RJ Raunac along with pop singer Daler Mehndi did the entire show live from a radio booth mounted on a billboard at Rajouri Garden on January 29, 2013. Similar shows were conducted from unipoles in Noida on February 1 and Gurgaon on February 6.  Sudhir Kumar Chaudhary, widely recognised for showing up at every cricket match the Indian team plays with his body  painted in the national colours, attended the event in Noida. Deep Money, Punjabi pop singer of ‘Dope Shope’ fame, was part of the Gurgaon show.   All three events were executed by DDB MudraMax - OOH which has built a formidable reputation for innovative outdoor activation guaranteed to grab eyeballs and generate buzz. The audience was mesmerised. Lot of fans were happy to meet Bauaa. Each and every vehicle that passed the location noticed the event and several people stopped to meet RJ Raunac. The Delhi show became so popular that almost every media channel came to cover the next two shows at Noida and Gurgaon.   Nisha Narayanan, Senior VP - Projects and Programming, 93.5 Red FM, said, “We always strive to think different and innovate to connect with our listeners. Thus, it is our constant endeavour to set higher standards of radio programming. Initiatives like Bauaa Hawa Mein help in bringing the brand and our jocks closer to the listeners.”   Mandeep Malhotra President, DDB MudraMax, said, “It’s always a wonderful feeling to take up challenging assignments and deliver clutter breaking work for any media brand. We are really kicked about this work and are looking forward for doing more exciting work in the fresh start.” Info@BestMediaInfo.com