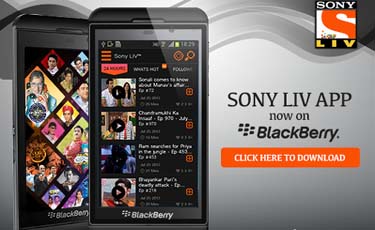 Sony LIV, Multi Screen Media (MSM), has announced that its premium video-on-demand service will now be available as a free download on the BlackBerry® World™ storefront for the BlackBerry® Z10  and BlackBerry® Z30 smartphones. The app lets customers enjoy the over 18 years of rich and exclusive content from Sony’s stable, covering genres including drama, comedy, thriller, reality shows and many more on the Sony LIV platform - anytime and anywhere.

Sony LIV is the one point digital destination into the world of Sony Entertainment Network. It offers an interactive user experience through various innovative features. Users can use the Mood Wheel on Sony LIV to watch their favorite video as per their mood/genre; they can create playlists of their choicest of shows through My Q and be rewarded as a LIV Guru, by consuming Sony LIV content.  In addition to original complete content, Sony LIV also offers short content formats like Catch-up episodes, Quickisodes and Short crunch episodes.

Speaking on the development, Nitesh Kripalani, Executive Vice-President – New Media, Business Development and Digital/Syndication at Sony Entertainment Network said, “At MSM, we want our rich content to be easily and conveniently available to users;  Our alliance with BlackBerry is another step in fulfilling our vision.”

Annie Matthews Director, Alliances and Business Development at BlackBerry said, “BlackBerry's all-touch smartphones pack performance coupled with HD resolution displays, as well as and the ability to display content from the smartphone directly on an HDTV, giving customers a great platform for consuming video content on demand. We are pleased to have Sony LIV available for the BlackBerry Z10 and BlackBerry Z30 smartphones, offering customers access to another great channel of Entertainment and rich content.”

BlackBerry Z10 and BlackBerry Z30 smartphone customers can now catch all the action across the Sony spectrum including Sony Entertainment Television, MAX, SAB, MIX, and a whole host of movies also in the pipeline. The premier Video on Demand brand is already available online and on other platforms.