Lift your mood with Airtel's VAS

The campaign, created by Cartwheel Creative, shows how entertainment can help save a rotten day 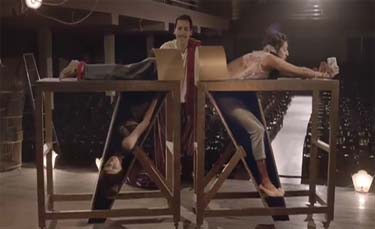 Lift your mood with Airtel's VAS

The campaign, created by Cartwheel Creative, shows how entertainment can help save a rotten day

Airtel's value added services have been an important part of its offering since its launch. But recently, the telecom operator came across the idea that smartphone users have been using the internet conveniently while the feature phone user has very limited options. It is this thought which led to Airtel's decision to unify their VAS services under one number.

The feature phone user in India is still quite a large number. They crave for entertainment, just like the smartphone user, but are left wanting more since they have little or no option. Airtel has close to 150 different entertainment services across all possible genres like Bollywood, music, sports, astrology, etc. The only challenge is making the consumer aware about them.

To address this, they have now unified all VAS under a single number – 56789. The consumer can just dial this number to access any value added service. The portal has an intuitive user interface that throws up relevant options basis a consumer’s past purchase behaviour.

To promote this, Airtel has come up with a campaign consisting of three TVCs which have gone on air for eight weeks starting November 14. The campaign highlights the role of entertainment in people's lives while showcasing the different value added services available on the portal.

"Our brief was to find an insightful and memorable way to make the existing Airtel subscribers use their value added services. Targeting it at the normal feature phone users, we had to make sure that we could find something relatable and yet funny," said Ramakrishna (Ramki) Desiraju. CEO, Cartwheel Creative Consultancy.

The first TVC, Scaffolding, shows a boy taking a photograph while standing on a ledge. He pushes his documents a bit to make space and accidentally throws his phone off the building, which lands on a ledge some floors below. The boy musters up courage and climbs down a makeshift scaffolding to rescue his phone. However, as soon as he lands on the ledge, the scaffolding gives way and he is stranded. Knowing that there is nothing he can do now, he dials 56789 and listens to some jokes which make him feel lighter.

The second TVC, Magician, shows a magician showing his assistant how to perform a trick. He locks her hands and legs and continues to talk but trips and falls below the stage. As he lies there, unconscious, the assistant cannot help or move. So she uses the VAS service to listen to astrology on her phone.

The third film, Shortcut, shows a man stuck in traffic, much like the usual scene in any city. He takes a shortcut to avoid the traffic only to realise that the road is blocked by some building materials. As he curses under his breath, a truck comes and dumps more building material on the other side of the narrow lane. The guy, now stuck in his car, cannot move anywhere. So he dials 56789 and listens to some Bollywood song to take his mind off the situation.

All three TVCs end with the voiceover announcing "Jabh zindagu sataye, manoranjan hi bachaye (When life troubles you, only entertainment can save you)." It goes on to show that on calling 56789 one can get information about astrology, cricket, music, comedy, contests, news, radio and bollywood.

"The campaign shows what role mobile based entertainment plays in the lives of people. We use our phones all the time, and we noticed that any free time we get, we start using the internet or some such thing on our phones. We decided to show that things happen in our lives which are not always what we expect. Murphy's Law kicks in. And the only thing you can do at those times is forget about it, somehow lift your mood and feel good again. Entertainment provides that instant relief by brightening one up and that is what we are trying to show here," added Ramakrishna.