The campaign, created by Isobar India, will showcase for a month the rich heritage which makes India a destination where the more you explore, the more there is to discover 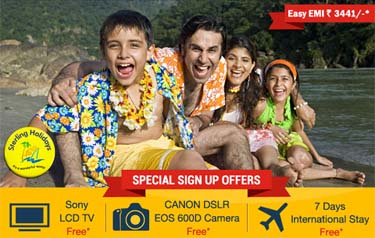 The campaign, created by Isobar India, will showcase for a month the rich heritage which makes India a destination where the more you explore, the more there is to discover

Isobar India has rolled out a social media campaign, India Unveiled, for Sterling Holidays. The campaign went live on October 2, 2013, a day India celebrated Gandhi Jayanti. The campaign is designed to unveil one amazing story a day about the nation’s amazing diverse culture, geography, history and achievements, amongst other aspects.

Sterling Holidays and Isobar believe that this campaign will showcase the rich heritage which makes India a destination where the more you explore, the more there is to discover. India Unveiled also hopes to garner a feeling of pride in India’s heritage and in the country’s great potential.

The campaign has been designed to feature one story a day, every day for 30 days through the month of October, across Facebook, Google+ and other channels. The first story highlighted the fact that with 1.8 million words, the Mahabharat is 10 times the length of the world’s other great epics, the Illiad and Odyssey, making it the world’s longest epic. This story was followed on day 2 with an update on the fact that India was the birthplace of the game of chess, which finds a mention in the world’s oldest political treatise – Arthashastra.

Commenting on the initiative, Ramesh Ramanathan, Managing Director, Sterling Holiday Resorts (India), said, “We believe that a vital aspect of delivering memorable holiday experiences is to share knowledge about India and the destinations we operate in. A nation like India has much to offer to travelers – from historical achievements and geographical wonders to diverse cultures. The India Unveiled campaign is a part of our effort to communicate fascinating aspects of India that will be of interest to travellers and Indians everywhere. Social media is the right medium for such an effort especially since travel is a category which sees a great deal of community sharing.”

Shamsuddin Jasani, Managing Director, Isobar India, commented, “The thought behind this campaign was to ensure that we use social media to create a meaningful impact for the brand within the minds of the consumer and not just look at a viral online promotion. India Unveiled is about publishing one short story a day on India’s amazing diverse culture, geography, history and achievements.”

The India Unveiled campaign has the potential of being extended through regular content updates and blogs.