Conceptualised by DDB Mudra Mumbai, this year’s May 1 campaign rode on the ‘For the Public, By the Public’ plank 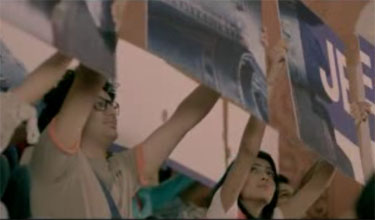 Conceptualised by DDB Mudra Mumbai, this year’s May 1 campaign rode on the ‘For the Public, By the Public’ plank

Retail giant Big Bazaar has successfully identified and created ‘artificial consumption occasions’ during national holidays like January 26 and August 15, and this has been emulated by other major players as well. One such shopping period created last year was the ‘Public Holiday Sale’ which happens around May 1, a public holiday for most of the workforce across the country. This year the goal was to strengthen and differentiate this potentially large-scale property.

With increasingly discerning customers and various ‘me-too’ sales catering to her, the retail sector has developed quite a few cynics and fence-sitters which has increased the need to differentiate this particular sale even greater.

Stemming from the consumer insight that it is not just about getting good offers in these sales but getting a good deal on the products that they actually want to purchase, Big Bazaar decided to conduct a wish list drive across the country inviting people to send across the products on which they wish to get the best deals.

Creative expression of the campaign: Public ki Demand ho gayi puri. By empowering the public to decide what deals they actually want and facilitating the same, Big Bazaar re-crafted its role in the consumers’ everyday life.

The Public Holiday Sale is unique not just in the sense that it offers consumers an opportunity to ask for the best deals on the products of their choice but also because of the fact that more the number of people asking for deals on a particular product, the better the deal gets on the said product.

DDB Mudra Mumbai conceptualized a campaign based on this insight that showcased a group of people holding up one of the universal symbols of demand – the placard. But this placard was not a normal placard – it was a placard that was formed when several people come together and bring their small placards closer.

This execution not only conveyed the thought behind the Public Holiday Sale but also gave the property scale and magnitude.

Sadashiv Nayak, CEO, Big Bazaar, said, “We are committed to create happy and exciting family shopping occasions for our customers. Public Holiday Sale was launched last year with a belief that we can add value and build excitement around holiday season shopping of customers and their enthusiastic response proved us right. In its second year, the Public Holiday Sale is already a benchmark for the industry. It re-establishes our commitment to be a one-stop shopping convenience and delight our customers with best deals and discounts.”

Anand Karir, Creative Head, DDB Mudra Mumbai, said, “Being the magnanimous retail giant that it is, Big Bazaar has always led the category from the front and taken it upon itself to set new trends and create artificial consumption occasions for the end customer. When we got the brief for Public Holiday Sale, our singleminded objective was to make it an event that’s completely different from anything that the category has witnessed hitherto. Our idea for the campaign was that while most sales in India happen in a way that the sellers offer discounts on products of their choice, only Big Bazaar can reverse this trend and democratise the whole act of sale by actually asking customers the products they want discounts on, and then offer those products at the most attractive prices. Hence was born the idea of making it a sale ‘For the Public, By the Public’.”