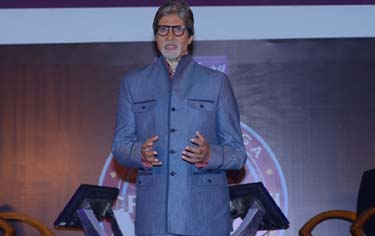 Weekends will not be the same again, as after two stupendously successful seasons ‘Kaun Banega Crorepati’ (KBC), India’s biggest reality game show is back in all its electrifying glory to set your television screens alive starting September 7, 2012 on Sony Entertainment Television. The game show that has created history on Indian television with the iconic Amitabh Bachchan as its host is all set to delight its audiences with a brand new innings this season with ‘Sirf Gyaan Hi Aapko Aapka Haq Dilata Hai’ as the central theme. Produced by Big Synergy Media Ltd, this season of KBC will air at the weekend slot from Friday to Sunday at 8:30 p.m.

The show was launched today with the rendition of a powerful narrative on ‘Gyaan’ by none other than the one and only Amitabh Bachchan in his classic baritone. Speaking on the occasion N.P Singh, COO, Multi Screen Media said, “It is a glorious moment for all of us at Sony to bring back another power packed season of the magnificent game show Kaun Banega Crorepati on our network, This year’s theme ‘Sirf Gyaan Hi Aapko Aapka Haq Dilata Hai’ celebrates knowledge as the greatest leveller in our society and a potent change agent.”

Added Sneha Rajani, Senior EVP and Business Head, Sony Entertainment Television, "We are honoured to have the one and only Mr. Amitabh Bachchan hosting KBC once again. He brings tremendous amount of charisma and his ability to connect with one and all with his sincerity and humility takes the show to another level. KBC is not just a popular game show, but a powerful platform where people from all across India, cutting across the demographic, geographic and social boundaries converges to celebrate common man’s triumph against all odds. It celebrates knowledge as a powerful tool which can help change his destiny.”

Speaking on the occasion, Siddhartha Basu, CMD, Big Synergy Media Ltd. said "We're back. This time we've gone further down the road into the heartlands and hinterlands of India, and come up with a fascinating line-up of ordinary Indians as contestants, extraordinary for their diversity and individuality, each one of them looking for an opportunity to transform their lives through this knowledge game. They're more knowledgeable than before, better prepared, and hungry for success. They are the unseen faces of an emerging India, thirsting to prove themselves. It promises the viewer quality entertainment, which engages both the heart and the mind. "

After the extraordinary response to the KBC auditions this year, where approximately 1.5 crore people registered, the biggest game show on television is back once again to make Crorepati’s out of ordinary people. Kaun Banega Crorepati is more than just a television show on Sony Entertainment Television (SET). It is a true phenomenon which is all set to entertain you for 21 weekends, 58 delightful and heart-wrenching episodes, that will comprise of special episodes with unique and distinct themes which will capture a little bit of India in every episode, lined up to ignite the minds and hearts of Indian audiences.

Online users can log on to www.kbcsony.com the official online destination for KBC and   re-live the excitement of the past seasons of the show and increase their “Gyaan” by playing the KBC game online, get behind the scene snippets, have the opportunity to win passes to visit the KBC studio, engage with interactive social applications and a lot more. On social media, you can find us on Face book and Twitter on #KBC.