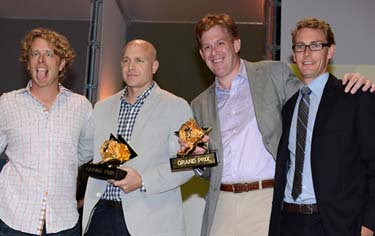 The Cannes Lions International Festival of Creativity has held the first of four Awards Ceremonies to honour the winners of the Promo & Activation, PR and Direct Lions categories.

Of the 2,667 entries submitted in the Promo & Activation category, a 26% increase versus last year, 251 were shortlisted from which 86 were selected as winners by the international jury led by Nick Worthington, Creative Chairman, Colenso BBDO New Zealand. Along with the Grand Prix a further 17 Gold, 26 Silver and 42 Bronze Lions were also awarded.

2,357 entries were submitted into the Direct Lions category, an increase of 27% compared to 2011. 227 went on to make the shortlist of which 15 Gold, 25 Silver and 44 Bronze Lions were awarded. Gideon Amichay, Former Chief Creative Officer, Joint Managing Partner of Shalmor Avnon Amichay / Y&R Interactive Tel Aviv, presided over the Direct Lions jury.

The PR category received 1,130 entries, up 38% from last year. The jury, chaired by Gail Heimann, Vice Chair of Weber Shandwick, shortlisted 134 and went on to award 20 Gold, 22 Silver and 26 Bronze Lions bringing the total number of winners in the category to 69.

The prestigious Direct Agency of the Year award was won by Serviceplan Munich with Wieden+Kennedy Portland coming in second and DDB Brasil São Paulo taking third.

All of the Promo & Activation, PR and Direct Lions winners along with their credits can be viewed online at www.canneslions.com/work.

Delegates attending the Festival have already experienced an exceptional content programme with seminars coming from, amongst others, GroupM & Renren, The Globe and Mail, PARTY, Visa & TBWA and Cheil Worldwide. This year has also seen the introduction of The Forum, a new stream of content offering in-depth insight into the key industry issues, which saw six sessions taking place today including PMK*BNC and Kraft Foods.

The three Academies have also kicked off. The Roger Hatchuel Academy allows students a week of unrivalled learning and experiences, whilst the Creative Academy for Young Marketers provides intensive insight and training for young professionals working for client marketers and the newly launched Creative Academy with Bob Isherwood gives Young Creatives already working in the industry the space to develop their talent and expand their personal creativity.

The 59th Annual Cannes Lions International Festival of Creativity, the largest and most coveted awards in the industry’s calendar, is currently taking place in France, attended by over 11,000 industry peers.