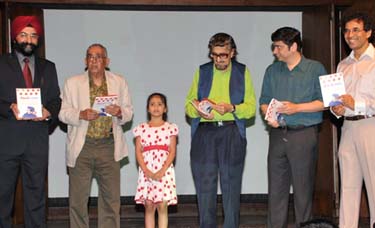 The Amul campaign has for decades told the contemporary story of India, a hoarding at a time. The hoardings have been a commentary to the ‘popular’ history of India over this period. Seemingly ageless, this long-running campaign has captivated fans across all ages and time.

On Monday, June 11, 2012, a book, Amul’s India, celebrating the journey of the lovable little girl in polka dots was released in Mumbai in the presence of the man who started the world’s longest running campaign ever, Sylvester daCunha.

The book takes a look at the Amul ads through the eyes of prominent writers, public figures and even those who were at some time or the other subjects of the hoardings. It contains a series of vignettes, creating a patchwork quilt of essays, snippets and selections of classic hoardings. It offers us an inside peek into the back story of the creation of the ads. It traces how Amul has evolved as a brand by commenting on the popular political and social culture of India over the past four decades.

Rahul daCunha, MD and Creative Head, daCunha Communications, attributes it to the regard held by even the polity for the brand. “Amul is one of the oldest and best known, fully Indian brands and holds a special place in our advertising space. It is also at the end of the day a co-operative. I guess these factors do play a role in influencing the way everyone interacts and views the brand itself," he said.

RS Sodhi, Managing Director, Gujarat Cooperative Milk Marketing Federation (Amul), said, “The Amul brand has become iconic due to its advertising campaigns, primarily on hoardings, in the last five decades. Hence, we thought of bringing out this book which not only is a compilation of 200+ evergreen topical ads but also a commentary on the same from leading celebrities, authors, ad men and like to give the readers a unique perspective on the medium and the message.”

To put things in historical perspective, way back in 1966, Amul hired Sylvester daCunha, then MD of ad agency Advertising and Sales Promotion (ASP), to design a new ad campaign for Amul Butter. Amul then needed to create a response to rival brand Polson's butter-girl. It is said that Dr Verghese Kurien, the father of the White Revolution and then Chairman of Gujarat Co-operative Milk Marketing Federation, suggested a mischievous little girl as a mascot with two requirements: it had to be easy to draw and memorable as most of the advertising would be outdoor media which required hand painting in those days and the hoardings had to be changed frequently.

daCunha conceived the campaign as a series of hoardings on topical themes relating to day-to-day issues and even politics. His Art Director, Eustace Fernandes, who was also a cartoonist and illustrator, created the Amul Girl in polka dots in 1966. The rest became history. (Fernandes died in March 1975.)

The campaign soon became widely popular and earned a Guinness World Record title as the longest running ad campaign in the world! Since the 1980s, cartoon artist Bharat Dabholkar has been involved with sketching the Amul ads. He rejected the trend of using celebrities in ad campaigns.

Despite encountering political pressure on several occasions, daCunha's agency did not back down. The Amul girl has always got away making fun of almost everyone, be it a politician, a cricketer, a mafia don, government undertakings et al. Of course, this led to controversies at times. Indian Airlines often was at the receiving end of the Amul girl who would be declaring: “Indian Airlines Won't Fly Without Amul”. Then there was an ad during the Ganpati festival which said, “Ganpati Bappa More Ghya (Ganpati Bappa take more)”. Shiv Sena men in Mumbai had threatened to destroy Amul’s office if the ad was not removed.

Even after almost 50 years, the lovable polka-dotted Amul girl has turned out to be a great survivor. And the book is a celebration that would be of enormous interest to an observer of contemporary India, be it a brand manager, a management student or a fan of Amul.

Brand design company DY Works has designed the book. Said Alpana Parida, President, DY Works, “The Amul ads have been ‘live’ and still bring smiles to people’s faces. We wanted to create a ‘living’ collection – which pushed the reader to engage and analyse rather than ‘collect’. The idea was to invite writers, social commentators, ad men and of course, the ‘victims’ of the hoardings themselves – to bring forth their unique viewpoint.”