Pepsi brings Cricket & Football together in a new campaign 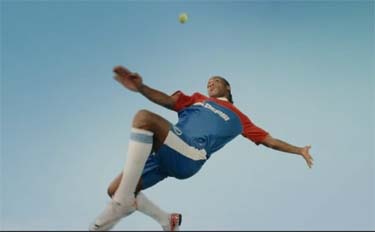 Pepsi brings Cricket & Football together in a new campaign

Cricket and football, the two most loved sports around the world, come together in a never seen before format… Pepsi changes the game with its spectacular new campaign featuring the Indian heroes of international cricket, Mahendra Singh Dhoni, Virat Kohli, Suresh Raina and Harbhajan Singh; along with the biggest global football stars, Didier Drogba, Frank Lampard and Fernando Torres. With cricket season at its peak and Pepsi T20 Football creating waves across the country, the new campaign brings together the biggest passions of a sports fan!

It is the ultimate face off between the gods of sport… So, do the athletes play football or they play cricket? Here lies the twist as our cricketers challenge the footballers to a game of cricket to win Pepsi, while the footballers show them how to play cricket - football style. Fun and irreverent, the film captures the essence of ‘Change the Game’ with a foot tapping soundtrack, ‘Mauke Pe Chauka’.

Homi Battiwalla, Category Director - Colas, Hydration & Mango Based Beverages, PepsiCo India said, “Being a true soulmate of the youth, Pepsi continues to bring to life Youngistaan’s passions in newer and refreshing formats. We celebrated the unorthodox face of cricket last year and gave the T20 twist to football this year; now we are bringing together both these sports on one common platform. Featuring the biggest names from the world of cricket and football, the campaign reflects our commitment to both the sports in our signature, ‘Change the Game’ way”.

“With this latest Pepsi campaign, we are bringing the cricketers and footballers together for the very first time in the history of Indian advertising. It is a truly clutter breaking campaign, mounted on a mega scale. The idea is simple with the ‘Change the Game’ thought at its core” added, Surjo Dutt, Executive Creative Director – JWT India.

Pepsi recently launched its first football campaign in the country featuring actor and avid football fan, Ranbir Kapoor, which set the tone for the real action. It was followed by a unique grassroots initiative, Pepsi T20 Football that takes football outside the conventional domain, giving it a refreshing twist. The Pepsi T20 Football initiative combines the excitement and fun of T20 style of playing cricket with the speed, thrill and spirit of football. Organized in a unique metallic cage, the initiative is being organised in major Indian cities including Chennai, Bengaluru, Kolkata, Mumbai, Lucknow, Ludhiana and Delhi, with phenomenal response. A total of 8-teams, including 1 winning team from each city and 1 wild card entry will compete to emerge as ‘Game Changers’. They will then get the opportunity to be coached by an international football star before they face the Indian Cricket Stars for a game of Pepsi T20 Football at the Grand Finale.