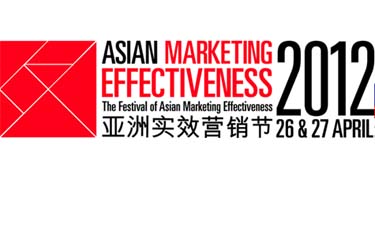 The Asian Marketing Effectiveness Festival has been brought to a close with its 10th Awards Ceremony, seeing the much anticipated winners announced, honoured and celebrated.

35 jury members, led by James Thompson, Chief Marketing Officer, Diageo Asia Pacific, came together in Shanghai to judge and deliberate over the record 971 entries, from 21 countries, which were received into the awards this year. 115 entries made it to the shortlist and from this the jury have awarded 51 winners: 1 Platinum, 11 Gold, 14 Silver and 25 Bronze. Australia took home the most trophies with 16, followed by India with 10 and China and Singapore both with 6.

Among the Indian agencies, Ogilvy and BBDO India won 3 metals each while Lowe Lintas, W+K, Jack in the box and DDB Mudra won 1 medal each.

The sought-after Platinum trophy, given to the entry that has truly combined innovation, creativity and effectiveness, has this year been awarded to Clemenger BBDO & Clemenger Proximity Melbourne, Australia, for their Integrated Marketing Campaign for the National Australia Bank, 'Break Up'. This, along with all of the winners, was revealed to a busy and excited audience at the Awards Ceremony Gala Dinner taking place at the Pudong Shangri-La Hotel in Shanghai.

Commenting on the Awards, Tim Waldron, Managing Director of Haymarket Asia says, "These Awards have been truly fantastic and I am certain that the crowds have left feeling inspired by the work that has been celebrated here. Entry numbers may have been at their highest but this did not take away from the quality and exceptional standard of work we have seen. We would like to thank the jury for their hard work and congratulate all of the winners on their success at the 2012 Awards".

The Awards mark the end of another hugely successful Festival which not only saw record breaking entries but close to 400 delegates attending. Providing unmissable content, delegates saw seminars from the likes of adidas, BBH, BBDO Proximity, Isobar, JWT, Lowe+Partners, Ogilvy & Mather, PHD and more, allowing delegates to learn and be inspired from industry experts.

"It’s great to witness the growth of the Festival; walking around the venue you can really feel the buzz and the enthusiasm coming from the delegates. With unrivalled content, learning and networking opportunities the Festival has truly marked its place as the must-attend event for marketing, advertising and media specialists in the region. We look forward to bringing it back even stronger in 2013", says Terry Savage, Chairman of Lions Festivals who with Haymarket are joint organisers of the Festival.